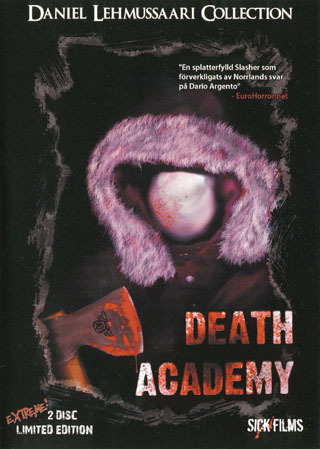 "In this school they don't dissect animals."
"Once a murderer, always a murderer."
—Niklas
Advertisement:

Death Academy is a Swedish low budget slasher movie by Danne Lehmussaari from 2004.

Four teenagers are brutally murdered in a massacre at a Swedish school. One of the school's students, Niklas, is convicted for the deaths. Years later a group of students led by Elin want to do some research on the killings believing Niklas is innocent and that the real perpetrator is still out there. This coincides with Niklas' release from prison. One night, the students get attacked by a hooded person and have to find a way to survive.