Film / When We First Met 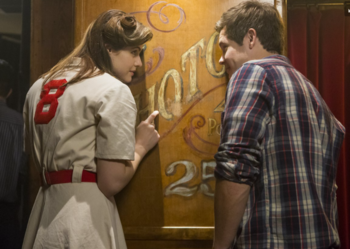 All he needs is a second chance to be her first choice.
"Relationships are all about energy, and attraction, and... intangible things."
— Carrie, summing up the movie.
Advertisement:

When We First Met is an American romantic comedy, staring Adam Devine, Alexandra Daddario, Shelley Hennig, and Robbie Amell. It is written by John Whittington and Devine, and directed by Ari Sandel.

Noah Ashby (Adam Devine) spends the perfect first night with the girl of his dreams Avery Martin (Alexandra Daddario) at a Halloween party in 2014, but somehow, Avery ends up happily engaged, 3 years later — to someone else. After discovering a way to alter the past, Noah, via different costumes, personas and backstories, makes play after play for Avery — sometimes succeeding, sometimes failing, but always, inexplicably ending up in the exact same place he started: 2017 — without her. Until finally something changes — in Noah.

When We First Met is an inventive new look at the age old question of who is truly "meant to be," as Noah gets closer and closer to a life he may not actually be right for.