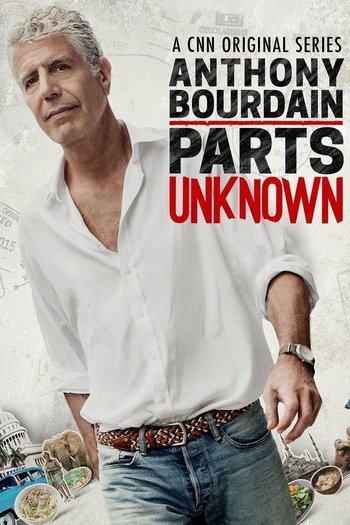 "One day I was making television about eating and drinking, the next, I was watching the (Beirut) airport I’d just landed in a few days earlier, being blown up across the water from my hotel window. I came away from the experience deeply embittered, confused—and determined to make television differently than I’d done before. (...) Our Beirut experience did not give me delusions of being a journalist. I just saw that there were realities beyond what was on my plate—and those realities almost inevitably informed what was—or was not—for dinner."
—Anthony Bourdain, blog post

reflecting on his 2006 Beirut mis-adventure

The Spiritual Successor (really more a Channel Hop with a new name) of No Reservations, Anthony Bourdain's Travelogue Show of off-the-beaten-path exploration around the world through the lens of a former chef exploring culture through food, with a larger dose of topical current and political events courtesy of the show's new home on CNN. The jump occurred in 2013, spurred in part by Bourdain's dissatisfaction with a change in management at Travel Channel and lured by the promise of CNN being able to get him to places that would otherwise be inaccessible to him, such as Iran.

In format and tone the show was pretty much identical to the later years of No Reservations, featuring an older, wiser, mellower Bourdain, no longer the subject of the Butt-Monkey leanings of his earlier years. Fitting for the show's new network, there's a lower emphasis on checking out tourist destinations and a higher one on exploring a place's history and politics.

Sadly, during filming of an episode set in Strasbourg, France, in June 2018, Bourdain took his life at the age of 61; he will be dearly missed. While it is unknown what will become of this particular episode, CNN has announced plans to air the final completed episodes in September 2018.