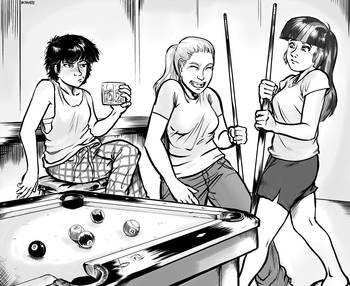 From left to right: Jo, Alice, and Twilight
Advertisement:

is a My Little Pony: Friendship Is Magic fanfic set in MerlosTheMad's "Madverse," the same setting as My Little Marriage Mary Is A Mare (among other fics).

Josephine Faux is a grouchy web designer who, after a colorful thunderstorm, finds a naked purple-haired girl claiming to be Twilight Sparkle. After a day of playing skeptic, Twilight shows her some mysterious crystals in a crater she left behind to prove her identity. Armed with this knowledge, Jo and her perky friend Alice join forces to find Twilight a way home… if they don't drive each other crazy first.