Recap / Star Trek: The Next Generation S4E12 "The Wounded" 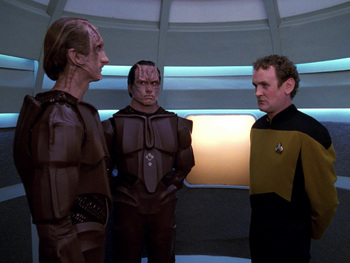 The first episode to give Ensemble Dark Horse Miles O'Brien a serious backstory (and a dark one at that). How well did it work out? Why, it carried him to the main cast of Star Trek: Deep Space Nine!

The Enterprise is mapping space near the Cardassian border. Everyone is tense; up until very recently, the Federation and the Cardassian Union were engaged in a long, bitter conflict, which only now is beginning to die down. In fact, the details of the peace treaty are still being ironed out as they speak, so everyone is treading lightly.

Meanwhile, Miles O'Brien and Keiko Ishikawa-O'Brien are enjoying wedded bliss. Over breakfast, Miles delicately puts forward that maybe Keiko would like to try some of the traditional Irish foods that he grew up with. Not, of course, that he doesn't enjoy these Japanese delicacies and all... and their conversation is cut short by the Red Alert klaxon.

A Cardassian warship has come out of nowhere and opened fire on the Enterprise. The two ships exchange a few hits before Picard manages to establish communications and demand to know the reason for this unprovoked assault. Gul Macet (Marc Alaimo), the commander of the warship, claims that he's retaliating for an earlier Federation attack: a nearby Cardassian science station was just destroyed by a Federation starship. Picard uses all his diplomatic wiles to get the Cardassians to stand down so he can contact Starfleet and find out what's going on.

Shortly afterwards, Picard makes contact with Vice Admiral Hayden at Starfleet Command, who confirms the worst: Starfleet has a rogue captain on their hands. Benjamin Maxwell (Bob Gunton), commander of the Phoenix and hero of the Cardassian War, was the one responsible for the attack. And he's somewhere out there now, running silent, doing God knows what else. The Cardassian government has agreed to allow the Enterprise to try and find Maxwell before he does more harm, provided they allow a Cardassian presence on board. Macet will do nicely. Before signing off, Hayden cautions Picard to tread very carefully. Still recovering from their losses at Wolf 359, Starfleet is simply unprepared for another war. The fragile peace must be maintained.

Gul Macet and his two aides, Glinn Daro and Glinn Telle, beam aboard and are immediately escorted to the conference room. Chief O'Brien is also in attendance; O'Brien served with Maxwell during the War, and has a unique perspective on the man. O'Brien recollects Maxwell as a model officer and firmly believes that if he is doing this, it must be for a good reason. Of course Maxwell did lose his family in the War, during a particularly brutal skirmish that O'Brien himself participated in, which gives him motive in the Cardassians' eyes. Before the tense atmosphere can get much more tense, Worf breaks in: they've found the Phoenix. As the main crew heads to the Bridge, O'Brien rudely turns down an offer to share a drink with the two Glinns.

Back in their quarters, O'Brien whips up a lovely potato casserole for his wife, all the while humming a tune he remembers from the War. Miles expresses his concern about how everyone (but certainly not him, no sir) is still hostile, even though the war is over. Keiko points out that the war lasted a long time and only just recently ended, so it's to be expected that there's still some lingering bad feelings... and if he's feeling that way too, it's perfectly understandable.

On the Bridge, Picard and Macet watch on long-distance sensors as the Phoenix chases down a Cardassian cargo ship. The Phoenix ignores the Enterprise's hails, and Picard has no choice but to surrender the prefix codes to the Phoenix to Macet, who can relay them to a Cardassian warship closer to the action. This proves to be no avail, however; the Nebula-class Phoenix is more than a match for the Cardassians, destroying both the warship and the cargo ship quite easily.

In the aftermath, Picard goes to talk to O'Brien about it. O'Brien is shocked to hear what his former commander has done, but he still maintains his loyalty: if Maxwell did this, he insists, he had a good reason. Later, at Ten Forward, O'Brien runs into Glinn Daro, where he offers an apology for his behavior and an explanation: he was at the infamous Setlik III Massacre—where Maxwell lost his family—and that was the first time he was ever forced to kill someone. He says to the Cardassian, "I don't hate you. I hate what I became because of you."

Meanwhile, Worf catches Glinn Telle trying to access a secure computer terminal. Macet chews him out, has him confined to quarters, and apologizes to Picard, promising that Telle will be disciplined. Picard simply lets the matter slide as a show of good faith, and Macet gains a good bit of respect for the man. Macet remarks that he and Picard share a similar view: they both want to resolve this quickly and peacefully, and neither of them wants hostilities to start up again. Then Commander Data informs them of the news: they've caught up with the Phoenix.

The oddly charming Captain Maxwell beams aboard the Enterprise and greets O'Brien and Riker warmly. He immediately requests a meeting with Captain Picard and explains the situation: he's learned that the Cardassians are re-arming. That "science station" he destroyed? A secret military outpost. That cargo ship? Carrying weapons and running a high-energy subspace field to thwart security scans. Of course he has no proof, besides his instincts. And he believed that if he reported it to Starfleet, it would just get bogged down in official investigations and diplomatic wrangling until it would be too late to do anything to stop the Cardassians. When Picard points out that his actions were unsanctioned and in direct violation of the peace accords, Maxwell accuses him of being part of the problem. Regardless, Picard tells him that his orders are to escort Maxwell and his crew to the nearest Starbase to face charges, and Maxwell can do that in command of his own ship or from the Enterprise's brig.

Reluctantly, Maxwell agrees, but once both ships set off, the Phoenix breaks formation and goes after another nearby Cardassian cargo vessel. Picard gives chase and summons O'Brien to the Bridge for his insight into Maxwell's tactics. When they both catch up to the Cardassian ship, Maxwell hails the Enterprise and offers Picard proof: come aboard the ship with him and see for himself what they're carrying, or else he'll destroy it then and there. Faced with the possibility of being forced to fire on another Federation vessel, Picard asks O'Brien for advice. O'Brien has no doubt that Maxwell will make good on his threat, but he has an idea: Nebula-class starships have a flaw in their deflector shields that O'Brien knows how to exploit. There's a narrow window where he could beam aboard the Phoenix and talk Maxwell down. Picard allows him to try.

Once aboard the Phoenix, O'Brien informs Maxwell of the situation: there's no way Maxwell can win this. Picard will destroy him to maintain the peace, and whatever good Maxwell thinks he's doing will be forgotten. Maxwell breaks down — and the truth comes out. Maxwell isn't doing this because he thinks this is right. He's doing this to avenge his family, just as Macet suggested. O'Brien sits next to him, comforting him, as they remember fallen comrades from the war. They sing together the old song O'Brien was remembering earlier, and Maxwell surrenders.

The crisis averted, Maxwell is in custody and the Enterprise is on its way back home. Macet expresses his gratitude to Picard, as well as his relief that a dangerous rogue element has been contained. Picard counters with the fact that before his breakdown, Maxwell was an exemplary commander and leader of men, and despite his recent actions, he still deserves that respect. And besides... he's not wrong.

After all, Maxwell's actions were improper, but he may have had a point: that "science station" was located in a system with no real scientific value, but great strategic value, in striking distance of three key Federation sectors. And cargo ships running with sensor-jamming fields? No one could deny that was suspicious, could they?

Macet poses the obvious question to Picard; if he really believes that, why didn't he board the ship as Maxwell suggested? Picard answers that he had he done so, the two of them probably wouldn't be having this pleasant conversation. In the end, Picard may not have any evidence for the allegations, but his mandate was and is to maintain the peace, not start another war, which he sharply reminds Macet would in all likelihood be detrimental to both of their people. So he's not going to do anything... except to tell Macet to convey a warning to Cardassian leadership: "We'll be watching."

Tropes featured in "The Wounded" include: