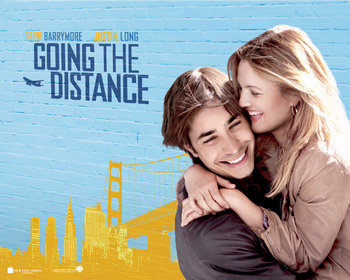 Going the Distance is a 2010 Rom Com starring Drew Barrymore and Justin Long. Erin (Barrymore) and Garrett (Long) start a relationship in New York while she is there for three months, working as an intern for a newspaper. They continue their relationship when she returns home to the West Coast. The movie follows their efforts to keep their relationship alive despite the obstacles.
Advertisement:

Not to be confused with the National Lampoon film of the same name.