Literature / Same Kind of Different as Me 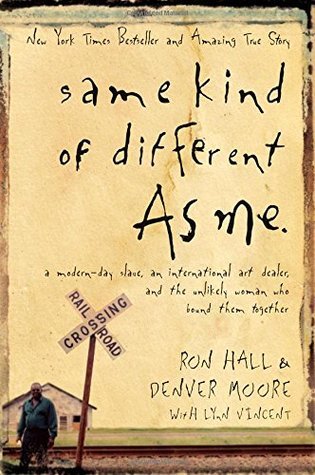 Same Kind of Different as Me: A Modern-Day Slave, an International Art Dealer, and the Unlikely Woman Who Bound Them Together, is a book published in 2006 and written by two men: Denver Moore, a former sharecropper turned homeless man, and Ron Hall, a wealthy art dealer. The book concerns their reluctant meeting through Ron's wife Deborah, who volunteers at a homeless shelter. In a way, it could be seen playing both White Man's Burden and Magical Negro, note the film adaptation, unfortunately, plays these tropes very straight but the reality is that it's also about their wildly different backgrounds and they how both learn from each other.

A film adaptation, directed by Michael Carney and starring Greg Kinnear as Ron, Renée Zellweger as Deborah, and Djimon Hounsou as Denver, was released in 2017 by Paramount and Pure Flix Entertainment.

Alternative Title(s): Same Kind Of Different As Me