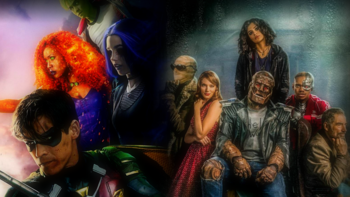 The Titansversenote A colloquialism; this will be changed if a more "official" name comes along is a Shared Universe of live-action series based on DC Comics characters, produced by and airing on the DC Universe streaming service since late 2018. This is notably the third concurrent live-action universe made by DC, after the Arrowverse and DC Extended Universe. Constructed by Geoff Johns, Akiva Goldsman and Greg Berlanti (notably the main guy for the aforementioned Arrowverse), the Titansverse is an attempt at a new universe that's not held back by network restrictions.

The universe has Darker and Edgier installments as the direct result of not abiding to either the rules of cable TV or the trappings of film, and it's been reported that it will have R-rated content.

Shows in the Titansverse include:

It's been hinted that these are just the first of more to come.

Note that this is a work in progress and will be improved over time.