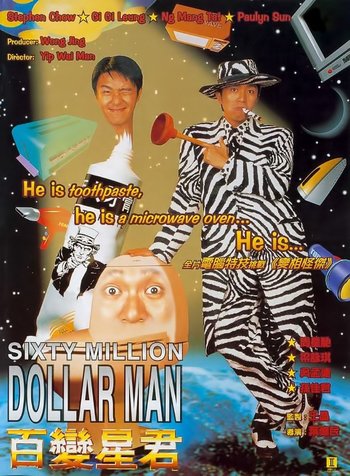 In case if you're wondering, yes, this guy does indeed transform into toothpaste, a microwave oven, and a toilet seat as well.
Sixty Million Dollar Man (百變星君, literally meaning "Sing of a Hundred Transformations") is a 1995 comedy movie directed by Raymond Yip, starring Stephen Chow, Ng Man Tat and Gigi Leung.

Lee Chak-Sing (Chow) is the spoiled son of Lee Yat-Fai (Wong Yut-Fei), the head director of a university in Hawaii, doing typical spoiled rich boy things: wooing girls, playing pranks on anybody unlucky enough to run into him, and intimidating people to the point he is feared by the entire university, with the exception of Chung-chung (Gigi Leung) and her professor uncle Chang Sze (Elvis Tsui). Things change for him one day however, when he was found to be the biological son of mansion servant Tat (Tat, yeah) as a result of a one night stand with said head director's wife, causing him to lose inheritance to Lee's wealth. And, because he got caught dating with a girl who is actually the girlfriend belonging to the Yakuza leader Fumiko (Joe Cheng), he got killed in an explosion planted by Fumiko's top assassin, Mark (Charles Shen).

Despite the explosion incinerating everything but Sing's brain and mouth, there's one chance to bring Sing back to life: a project to construct a new body for a dead person using what few body parts that are left intact... at a reasonable cost of sixty million dollars. But neither Sing nor Tat has the money for that as Lee abandons both of them at their desperate moment... yet not all hope is lost, as Chang has the know-how to replicate the body reconstruction process for a much, more affordable price of six thousand dollars. Rebuilt with whatever his father and the professor could have, Sing is forced to leave for Hong Kong to not alert Fumiko of his resurrection, and adjusts to his new life as a cyborg. But one day, when he's hired to teach in one of the worst private high schools in Hong Kong, things are about to take a whole new turn for him...

If you think this sound like the premise for a very Troperiffic movie, it is. With Chow's signature mo lei tau comedy style and providing homages to many action movies of the time like RoboCop and The Six Million Dollar Man while trying to fit in as many tropes as possible, Sixty Million Dollar Man is filled with plenty of moments that range from hilarious to dramatic, a hallmark seen in many of Chow's movies.