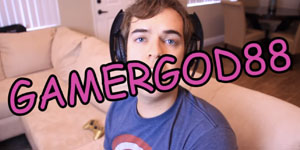 GamerGod88 (real name Brendan) is a character created and played by Jack Douglass from Jacksfilms, who grew to be the star of his own series on the Jacksfilms channel. An Affectionate Parody of Let's Players, GamerGod88 started out as a reappearing character in some Jacksfilms sketches. The videos he featured in (dubbed "Not-Gaming Videos", by Jack) fake Let's Plays. In April 2014, Jack announced that he had plans to make GamerGod88 the star of his own show.

GamerGod88 received split opinions from Jacksfilms fanbase when it first launched. The original plan was to release two videos a day, but it was quickly turned down to one, and he later decided to instead release multiple GamerGod88 videos as one bigger video every so often instead of making it a daily project. The reception that the show got was so poor that it not only surprised Jack but he ended up cancelling the show after not even a week. However, the show was Uncancelled in August of that year, and set to release a new video each Saturday, but quickly fell out of hand.

which he uses for weekly (in-character) livestreams. The first of these livestreams, which was not archived on the channel, can be viewed here

Appearances
GamerGod88 has appeared in many Jacksfilms videos. These include: