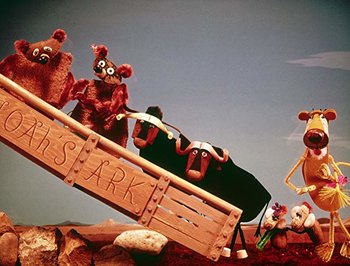 It is, you guessed it, the story of Noah's Ark. It seems that in ancient times there was a lot of "fussin' and fightin' and sinnin'", so God got ticked off and decided to annihilate all life on Earth...or most of it, anyway. He picks one godly man, Noah, and has him build "the first boat". On this boat Noah is to take his family, as well as two of each animal on the earth. The boat is built, the animals are loaded on board, and then they go on a pleasure cruise as it rains for forty days and forty nights.