Western Animation / Out on a Limb 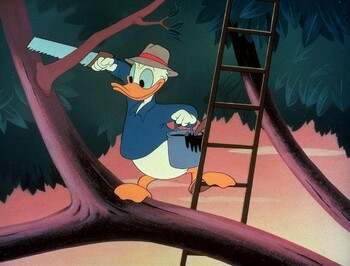 Out on a Limb is a 1950 Walt Disney animated short starring Donald Duck and Chip 'n Dale.
Advertisement:

Donald Duck is a tree pruner who does his work on a tree where Chip and Dale reside, and once he spots Dale gathering nuts, he decides to have a little fun with him by sawing the branch he was walking in and smearing it with tar. From that point on, Donald then proceeds to harass the two chipmunks with his leaf cutter.