"Would you stake your life on a world that cannot be saved?" 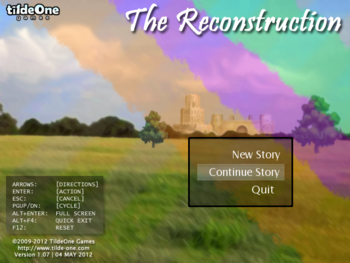 The Reconstruction is a very atypical RPG from Tilde One Games. The author describes that his intention in making this game was to defy convention at every turn — both in Eastern RPG gameplay and Heroic Fantasy writing.

The story is set in a seemingly-peaceful world that is full of turmoil under the surface. Three species live in a rough and unhappy coexistence in the world along with humans: fih'jik, cat-like humanoids who are very religious and devoted to the Supreme One, despite her apparently turning her back on them in a catastrophe known as "the Blackening"; fortians, similar to humans in appearance, but extremely stoic and scientifically-minded, with exceptional magical talent; and shra, Lizard Folk who cannot use magic, and are reviled and enslaved because of it.

The story focuses on Dehl Sikohlon, a shra of the peaceful Sikohlon clan. He's devoted his life to repaying the kindness the city of Wadassia has shown him with civil service as a city guard. To further this goal, he comes up with the idea to make a guild — a band of heroes — who go around doing tasks that ordinary people cannot, such as slaying monsters. Dehl's guild eventually traverses the entire world, exposing and mitigating the problems that each species face, with varying results. Further compounding problems is the existence of a mysterious woman known as Fell, who claims to receive messages from a divine being she calls "The Voice Himself". She seems to have even greater plans in store for Dehl and his guild, dispersing cryptic clues throughout his journey. But can she be trusted, and does she really know as much as she claims?

. A prequel, I Miss the Sunrise, can be found here

. A semi-sequel, The Drop, can be found here

. The fourth game, How Far, was in development until the creator had put it on an indefinite hiatus to focus on his first commercial project, The Tenth Line (see here

). Some data on How Far can be still found here

Characters, locations, and ideas from this game, as well as its sequels, made their way into a Spiritual Successor game, called Eden's Last Sunrise, by Sungazer Software.

For those interested, the creator has posted a load of trivia

about the game on his blog. Beware of spoilers, obviously.

Is not related to the 6th season in the web series Red vs. Blue.

"How far back must we stand before we can see everything ahead? And...does that mean we must lose sight of what was closest to begin with?"