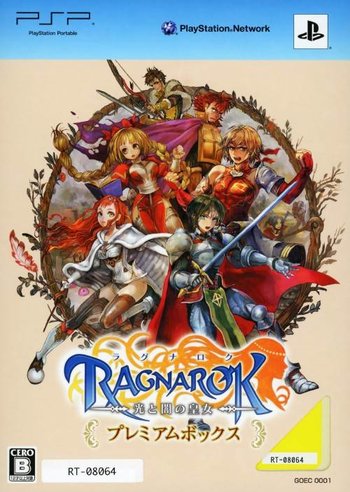 A Strategy RPG for the PlayStation Portable, inspired by the MMORPG known as Ragnarok Online. The developer is Apollosoft and Chime, while the artwork is provided by Tomatika (who'd you recognize from Eternal Poison).

First, there was The Holy War, in which people fought a battle against gods and demons that ended when humanity sealed their enemies away. Countless centuries later, most of humanity has made its home in the Grantria Penninsula, which has towering mountains to the north and a vast ocean to the south. Two notable factions exist in this area: the Branshaldo Empire led by Emperor Bernard III, and the Aura Republic currently chaired by Counselor Gilsede. There's also the Toren Militia, which was established by a former mercenary named Toren and focuses more on the problems created by war than participating in one. The Empire and the Republic fought for control, but once resources on both sides ran low, a tenuous peace was established. With the animosity between the two organizations never dimming, and the possibility that the seal binding away demons and gods might one day be broken, war could resume at any time...