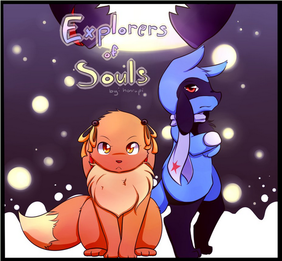 "I've played enough PMD to know where this is going."

. It follows the story of a sarcastic human-made-Eevee named Mel. It is in its early stages at the time this page is first under construction, but there is much evidence that there is far more to come from it.

The original Explorers of Souls comic (not this one), created in early 2013, featured honrupi herself as the Eevee-bound protagonist, with her real-life friends as side characters. At first, the comic was updated fairly regularly, with waiting periods becoming slowly longer and longer until Page 9, the final one written, was created 5 months after the previous. A few months later, a reboot was announced, with different, author-made characters. In June of 2014, the prologue was released. The first thing one may notice is that the remake is a good deal more satirical and less generic than the original. It is only on its second chapter, but the impressive artwork (even when compared to the original) and Deadpan Snarker protagonist raises the expectations of many.

However, this comic is currently put on hiatus so the author can make another reboot.

This webcomic has examples of: