Manga / If My Favorite Pop Idol Made It to the Budokan, I Would Die 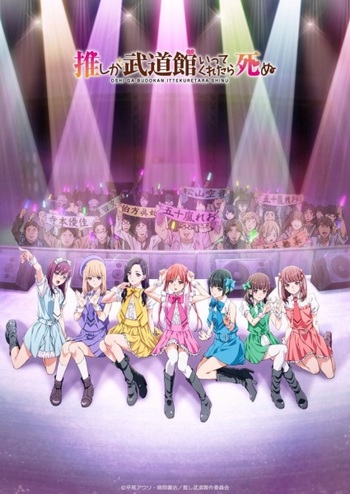 From left to right: Yuka, Yumeri, Maki, Reo, Sorane, Aya, Maina
"I always thought that idols were supposed to be dazzling. That's what I thought, but... but you were far more dazzling than I could've ever imagined and on that day, you nearly killed me."
— Eripiyo
Advertisement:

One day while walking through the park, Eripiyo is approached by two newcomers of an underground idol group called ChamJam. Accepting their invitation to watch their concert at the Cherry Blossom Festival, Eripiyo experiences Love at First Sight when one of the girls that came to her, Maina Ichii, notices her presence and waves at Eripiyo, beyond happy that she accepted the invitation.

And thus, begins one young woman's obsession with making sure her favorite idol singer and her group goes to Budoukan!

If My Favorite Pop Idol Made It to the Budokan, I Would Die (推しが武道館いってくれたら死ぬ Oshi ga Budōkan Ittekuretara Shinu) is a manga series by Auri Hirao and has been serialized in Tokuma Shoten's seinen manga magazine Monthly Comic Ryū since 2015. The series has been adapted to an 12-Episode Anime television series by Studio 8 bit and premiered on January 9, 2020. It is available on Crunchyroll for viewing as well as a dub release by Funimation.

If My Favorite Pop Idol Made It to the Budokan, I Would Die provides examples of: