Manga / Otogi No Machi No Rena 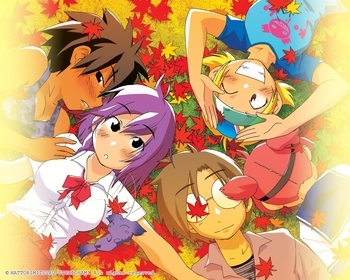 Otogi No Machi No Rena is an Ecchi manga by Hattori Mitsuru, which is set in the town of Otogi, where our heroine, Rena, lives a peaceful life between school and athletics, until she suddenly has unusually intense surges of lust and it goes from there. She can't always suppress her urges, so that the resident nerd and lech, respectively, soon catch on; while the first wants to help her and get in her pants, the latter just wants to get it on with her. Rena soon finds out that these surges come from little hairy creatures called Kegari Chota, which have possessed her and she is a idol and mother figure to them (literally) which they protect at almost any price or circumstance.