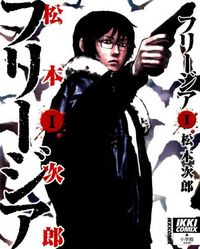 Freesia is a twelve-volume manga series (adapted a live-action movie) drawn by Jiro Matsumoto. Set in an Alternate History Japan, rampant crime and dwindling resources due to a war with another nation led the government to passing the Vengeance Act to keep prisons from overfilling. As a consequence, instead of going to prison, victims of a crime can legally try to kill the perpetrator, or enlist the help of a proxy agency to have their enforcers do it for them. The target can also enlist the help of bodyguards to help defend themselves (in the event that the target can't find/afford any, the government provides bodyguards for him).

The story starts with the main character Hiroshi Kano applying for a job as an enforcer for one of the best proxy agencies. Kano has a special ability of being able to "disappear" by blending into his environment so well others literally can't notice him. He is also a very mentally unstable military veteran. Together with Wide-Eyed Idealist rookie Yamada and somewhat agressive mentor Mizoguchi, Kano begins his life as an enforcer...

Freesia follows the lives of our main cast, as well as the people that they interact with and how the Vengeance Act affects society as a whole. It's drawn with Matsumoto's distinctive dirty and sketchy art style. Like any Jiro Matsumoto manga, expect to see hallucinations, plot twists, and lots and lots of Mind Screw.