Manga / Kyou no Go no Ni 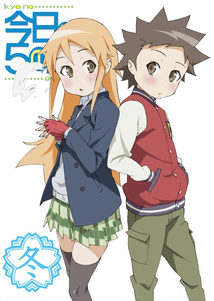 Kyou no Go no Ni (or Kyō no 5 no 2, meaning "Today in Class 5-2") is the debut Japanese Seinen Manga series created by Koharu Sakuraba, originally serialized in Kodansha's Bessatsu Young Magazine from 2002 to 2003. The twenty-two chapters were later collected together in a single bound volume along with two extra chapters and published on November 11, 2003 by Kodansha.

The story of the Manga and adaptations follow the lives of Ryōta Satō and Chika Koizumi, both now in their fifth grade of elementary school in class 5-2 together with their group of friends. The stories cover their many misadventures and complications as they go about surviving in the fifth grade and avoiding the problems that plague them at every turn.

Kodansha has announced that Xebec will be adapting an OVA version of the Anime in 2009, directed by Tsuyoshi Nagasawa, featuring the same cast as the Anime.