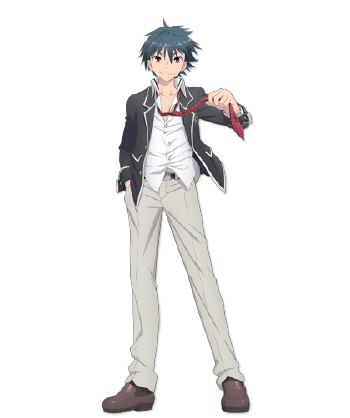 The main protagonist, Arata used to live an ordinary student's life with his cousin and lifelong friend Hijiri, until the Black Sun appeared and destroyed his city, after which his normal life was artificially reconstructed by a grimoire Hijiri left. After Lilith uncovers the truth of his situation, he decides to attend Royal Biblia Academy to learn to tap into his grimoire and find a way to save Hijiri. His thema is Imperium or "Rule" from the Superbia archive. 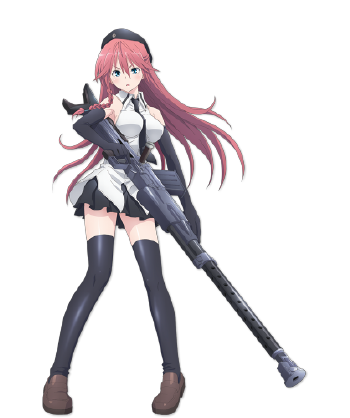 A red-haired girl and teenaged teacher at Royal Biblia Academy who Arata meets at the beginning of the story, warning him to "wake up" from the illusion he created. After the latter resolves to become a Magus to save Hijiri, he was assigned under her class. Her thema is Abies from the Luxuria archive. 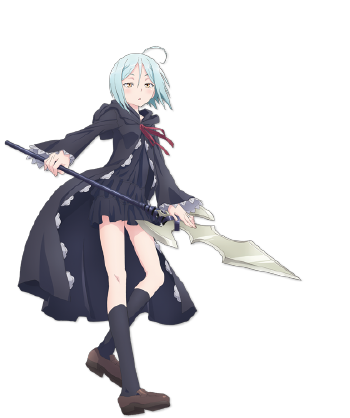 A strange blue-haired girl who bears an uncanny resemblance to Hijiri. Her thema is Ruina from the Ira archive. 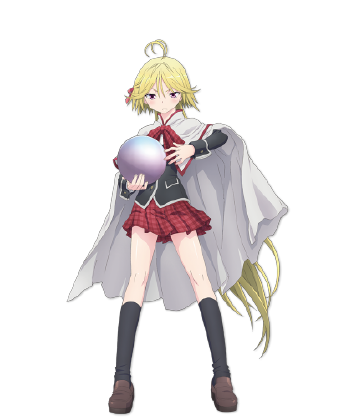 The Head of Grimoire Security. Her orb is her grimoire. Her thema is Justitia, which is part of the Superbia archive. 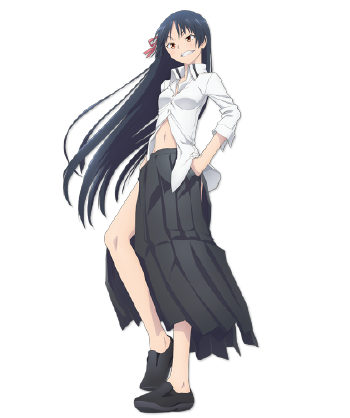 The partner of Mira in operating Grimoire Security. Her thema is Fides, which is part of the Gula archive. 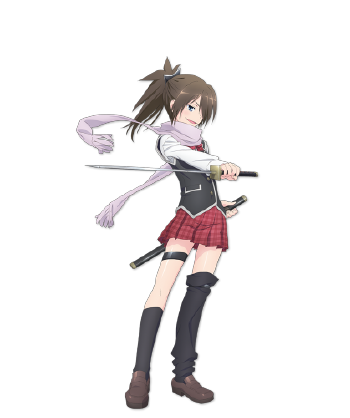 A ninja and the Trinity Seven of Invidia. As a user of Shamanic Spells, she is considered to be one of world's top five fighters. Her thema is Expectatio from the Invidia archive. 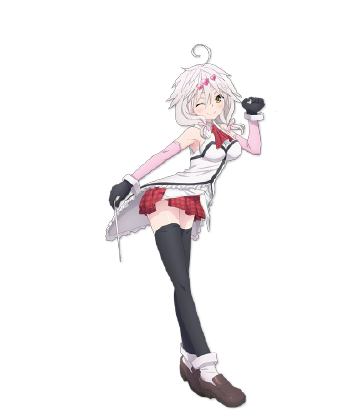 A special magus who lives in the dungeon underneath the academy. She is a Cardinal-Class magus, only second to Biblia academy principal. Her thema is Amicitia, which is part of the Avaritia archive. 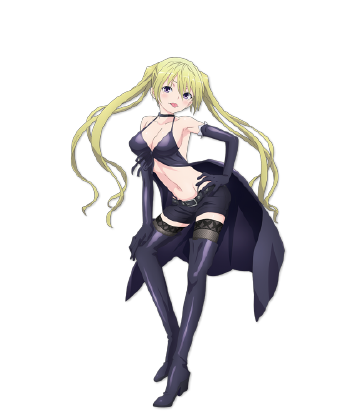 The twin sister of Selina who vanished in a school library six months before Arata enrolled at Royal Biblia Academy. She really transported to the Eternal Library and transports Arata and Trinity Seven there when she decides to steal their magic to become a Demon Lord candidate. Her thema is Stagna, which is part of the Acedia archive. 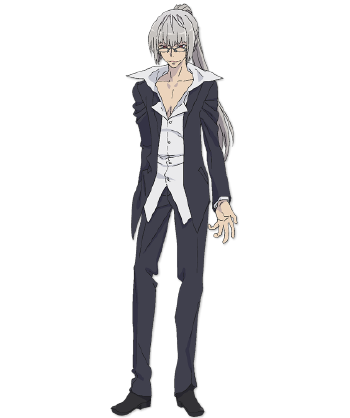 The intelligent yet perverted leader of Royal Biblia Academy. His thema is Concordia of the Ira archive. 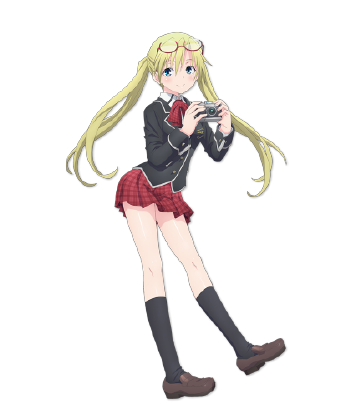 Liese's twin sister. Her thema is Ligare of the Acedia archive.

A student introduced in the spin-off manga Levi Story. She is sent with Levi to find the Mythical Armament Murasame.

Introduced in Anastasia Holy Story. She's a student who becomes the host of the Demon Lord Knight Aradis of the Crimson Rift. Her thema is Regius from the Superbia archive.

Introduced in Anastasia Holy Story. She's a student who becomes the host of the Demon Lord Knight Illyria of the Green Shell. Her thema is Analysis from the Ira archive.

Introduced in Anastasia Holy Story. She's a student who becomes the host of the Demon Lord Knight Azaria of the Peach Edge. Her thema is in the Luxuria archive.

Jorn Mamiya
Introduced in Anastasia Holy Story. She's a student who becomes the host of the Demon Lord Knight Voltea of the Blue Dream. Her thema is in the Invidia archive.

Arsha is a Paladin and headmaster of the Royal Akasha Academy. Additionally, she is Anastasia-L's best friend and partner, supporting her goal in protecting the world which involves Arata Kasuga. Her thema is Arbiter from the Superbia archive.

Mysterious girl from Royal Akasha Academy that Arata meets her during Biblia Academy school festival. Her thema is Terminus, a "lost thema" from the Luxuria archive. 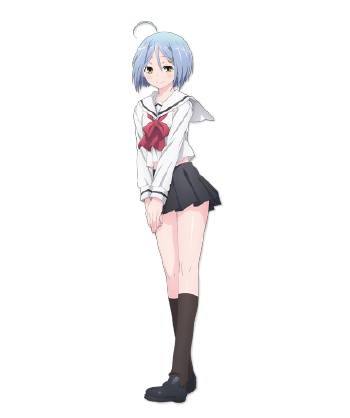 Arata's cousin and childhood friend. Her disappearance is what motivates Arata to become a magus in order to bring her back. When they reunite, he discovers Hijiri has joined Iscariot. Her themas are Ruina, Partum, and Analysis from the Ira archive.

Master Liber is the Paladin Class Headmaster of the now destroyed Liber Academy. She is presently a member of Iscariot, and is the closest thing seen to the group's leader thus far. Her thema is Sanctus from the Gula archive.
Lugh

Lugh is a thief who possesses three legendary treasures, as well as a member of Iscariot. Her magic is derived from the Invidia archive. She's a magus qualified for Trinity like Hijiri, using the themas Virtus, Faith, and Solvo to wield her mythical armaments. 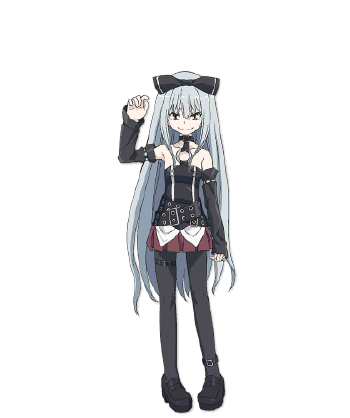 Arata's grimoire, given to him by Hijiri moments before she was swallowed by the Black Sun. Later she gains a humanoid form.

Another grimoire originally in Hijiri's possession. She took Hijiri's appearance and did household chores for Arata when the former is away on magus duty. 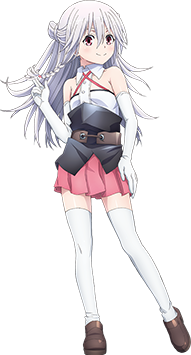 The grimoire of the Great Demon Lord Dis Trinity, as well as the "mother" of Sora.

The eighth chapter of the Ilias Fragments and Ilia's "younger sister". She later becomes Akio's grimoire.

The Demon Lord entity residing within Arata whose destiny is to destroy the world along with the Trinity Seven. 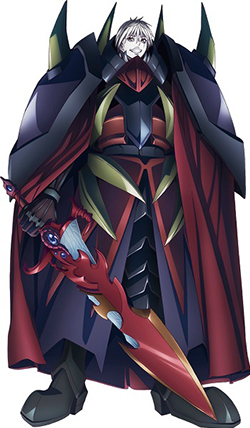 The Crimson Demon Lord. He was summoned from a destroyed world with only one fraction of his original power to be used as a Demon Lord Weapon against the current world's Demon Lord, but Abyss Trinity has his own plans to recover his original power and destroy the world himself once more using Lilith, his biological daughter. His thema is Vanitas from the Luxuria archive.

The Argent Purple Demon Lord. He is the Great Demon Lord who was sealed at the lowest level of the underworld behind Dante's Gate. His thema is Amore of the Superbia archive.

The White Demon Lord. He was created by the member of Malebranche Libic, also known as Hohenheim. His thema is Sileo from the Luxuria archive.

Pandora of the Silver Mirror

Introduced in the Anastasia Holy Story spin-off manga. Pandora is a Demon Lord of the Acedia archive whose Demon Lord factor ended up in the World of Demise after she destroyed her original world. She was a dear friend to Anastasia during the 17 years the latter spent in Demise, but Pandora acts as Anastasia's enemy when they meet again.

The leader of Malebranche and a fully-armored giant. His thema is Invicta from the Ira archive.

The strongest of the Twelve Demon Commanders. Rubine is the only commander who wasn't originally human as she's an embodiment of "The Original Sin of Darkness". Her thema is Auxilium from the Ira archive.

"The Mocking Hand of God" Arbariccia

The second-in-command of Malebranche. Arbariccia does not possess a physical body nor a soul, but is a set of memories and will that take control of a body. Her current host is the witch Mina Salem who was killed by her and Radix. Her thema is Flux from the Avaritia archive.

"The Shore of Torment by Scouring Seaweed" Miglione

A snake demon who enjoys devouring maguses. She is also known as the Phantasm of Water, an infamous Code D magus who submerged seven kingdoms in the depths of water. Her thema is Moderatio from the Acedia archive.

"The Gap in Distorted Time" Caggnazzo

Previously known as Pythagoras, originator of Logos Arts. He turned into monstrous demon and joined the Twelve Demon Commanders. His thema is Stagna from the Acedia archive.

A demon of Malebranche specialized in illusions. His thema is Ridic from the Invidia archive.

Formerly known as the Paladin-class magus Lafkutiba who transformed himself into a lion demon after the end of the Great Mage War. His thema is Cupiditas from the Avaritia archive.

"The Wind of Dark Destruction" Libic

Previously known as Hohenheim, a Paladin-class magus and originator of the Outer Alchemy. She is also the original owner of the Hermes Apochrypha and creator of Last Trinity. Hohenheim upgraded herself into demon and become one of the Malebranche. Her thema is Abies from the Luxuria archive.

"The Robes of Hollow Shadows" Graffia

A demon clad in a black armor. He stole the physical body of Dis Trinity, losing his soul and consciousness as a result. He's now serving as Arbariccia's obedient minion.

A werewolf magus and a demonic tree that become demons after entering Dante's Gate. They lost their sense of reason after years of devouring maguses, but later regain their sanity thanks to being defeated by some members of Trinity Seven.

A self-proclaimed "perfect ninja". Ryuhime was a candidate for the Trinity Seven of Invida and shares a past with Levi. Her thema is Perfectus from the Invidia archive.

Ryuhime's older sister who was killed by Levi.

The villain of Lieselotte Chronicle.

General
Aetheria Akasha
The Adjudicator of Arbiterium. She is the leader of the Adjudicators and a Paladin-class magus. She is also Arsha's mother who was the headmaster of Royal Akasha Academy before her. Her magic is derived from the Superbia cloud.
Aries Chaldea

The Adjudicator of Tempus. Aries is the descendant of the founder of Logos Arts, Pythagoras. Her thema is Infrequentia from the Acedia archive and cloud.

She first appeared in the spin-off manga Lieselotte Chronicle where she is the Trinity Seven of Acedia archive from β-universe instead of Lieselotte Sherlock.
Faunaria Road

The Adjudicator of Lux. Her magic is derived from the Temperantia cloud.

The Adjudicator of Pulchra. Her magic is derived from the Sapientia cloud.

The Adjudicator of Vis. Her magic is derived from the Fortiter cloud.

The Adjudicator of Umbra. She has a close relationship with Master Biblia who she calls her brother. Her magic is derived from the Avaritia cloud.

The Adjudicator of Anima.

The Goddess of Darkness that was sealed at the end of the Great Magic War. After the defeat of Dis Trinity, Aryan has started to awaken and is preparing for her revival so she can destroy all existence in the multiverse.

Introduced in the light novel Holy Maiden & Eighth Library. Celes is a mysterious, amnesiac girl who can connect to the Irritum archive that is considered a lost archive in modern times. Her true identity is Celestia, the priestess of Yggdrasil who sacrificed herself in the Great Magic War thousands of years ago.

A genius magus from the world destroyed by Abyss Trinity with whom she was very close to.