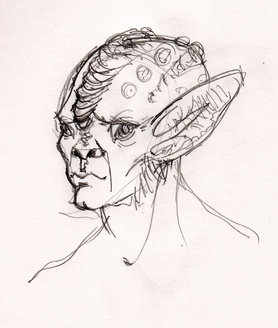 Concept Art of an Echmer male.
"When talk dies, it makes a mirror." – HRAHNDEYL, the Echmer God of Sound

The Uutak (pronounced you talk) Mythos is a collaborative writing and drawing community project set within the universe of The Elder Scrolls series of videogames. It was originally created by IceFireWarden, a member of The Elder Scrolls lore community, but has been added to by several notable and fantastic individuals since its conception.

It can be described as a type Fanon, but in reality is more of a massive world-building project built around the mysterious island of Yneslea

(transformed into an archipelago by the project) in the lore of the games, which has yet to be expanded upon by the developers. It expands upon and adds lore to Yneslea, specifically adding two new races that inhabit the islands:

There are multiple places online where one can find texts dealing with the Uutak Mythos: