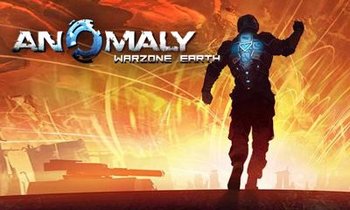 some caption text
"It was the year 2018 when the world looked to the heavens and watched as a giant comet bore down on our planet. We were the first ones on the scene - 14th Platoon. I know - I was there."
— 14th Platoon's commanding officer, in the opening cutscene for Anomaly: Warzone Earth
Advertisement:

Anomaly: Warzone Earth is a "Reverse-Tower Defence" game developed by 11bit Studios, which puts the player in charge of a military unit - the aforementioned 14th Platoon - in the wake of what, at first, is thought to be the impact of a disintegrating comet upon various parts of Earth.

The theory that the objects that hit Earth were merely parts of a disintegrating comet is disproven, however, when they create energy domes around large sections of Tokyo and Baghdad - and when, after penetrating the domes, the units of the 14th Platoon encounter resistance in the form of defensive towers that have popped up along the streets.

The idea behind this whole "Reverse Tower-Defense" schtick is that your squad of ground-borne units is driving slowly down a pre-selected pathway, adjustable in a Real-Time with Pause fashion. It's up to you, the commander, to choose the order and consistency of the convoy, as well as provide support using your power-suit's various abilities, such as a smoke screen to block heat-rays, a healing aura, a hologram to distract more powerful turrets, or a good old-fashioned air-strike.

Now has a sequel, and a interquel too.