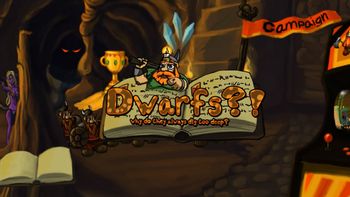 Dwarfs!? is an indie game developed by Power of Two and published by Tripwire Interactive. It was released on Steam on May 4, 2011. In here, you control a colony of dwarves as you help them dig their way to some treasure as you keep on expanding their territory. A free-to-play version has been released on October 18, with all tutorials and challenge modes free and other modes available for purchase.