Web Video / The Secret Life of a Mermaid 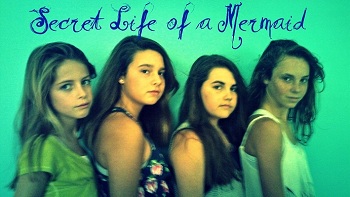 (L-R) Blaire, Amy, Kelsey, Brenna
Amy: I can explain.
Brenna: That's what you always say.
The Secret Life of a Mermaid or SLM is a YouTube webshow, created by Christine aka teenie989.

Amy Samuels (Christine) is a preteen girl who loves to swim and is constantly in a Sibling Rivalry with her older sister Tess (Bridget). After Amy mysteriously sprouts a mermaid tail and powers, she wishes for a friend to rely on, but she also wants to protect her secret. Her new friend, Brenna, becomes a mermaid as well. Another new friend, Kelsey, becomes jealous of their friendship, discovers their secret, and soon shares it. They learn they each have a different power: Amy has water (manipulation of water), Brenna has heat (fire, boiling), and Kelsey has ice/freezing. One day while swimming, they meet Blaire (Tessa), whose mother was a mermaid and abandoned her and her father to live in the ocean. The three mermaid girls struggle with keeping their secret, having problems with their powers, and interacting with Blaire.