open/close all folders
In General
A wizard without a hat wasn’t anyone, just a sad man with a strange taste in clothes.
Rincewind 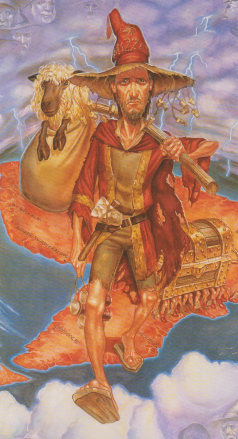 Luck is my middle name. Mind you, my first name is Bad.

A cynical, cowardly, and incompetent wizardnote (That is, 'one who follows the profession of wizardry', not 'one who actually casts spells or does anything magical') who frequently finds himself unwittingly thrust into situations where he must save the day. Rincewind has raised "running away" to an art form: he has the soul of a wizard and the body of a long-distance sprinter. One of the Discworld's greatest heroes, although he would vastly prefer not to be. Accompanied by an ill-tempered and overprotective sentient suitcase known as 'the Luggage'.

Galder Weatherwax
Early in the morning? My dear lad, you will need to stay up all night [to get the better of me].

Galder Weatherwax is the Deuteragonist of The Light Fantastic and the first of the Weatherwax family we are introduced to. He is Archchancellor at the Unseen University. He is the only wizard who seems to protest Trymon's presence. He is killed by the Luggage a quarter of the way through the story, leaving Trymon unopposed. 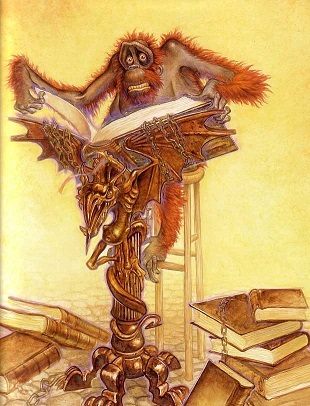 Librarian at Unseen University. Originally known as Dr. Horace Worblehat before the events that made him a mon... ape. He was turned into an orangutan in The Light Fantastic, and has outright refused to be turned back. This is because of the many advantages his new form offers, including increased agility and strength (and with a name like Worblehat, you can imagine he gets more respect as an orangutan than he ever did as a human). 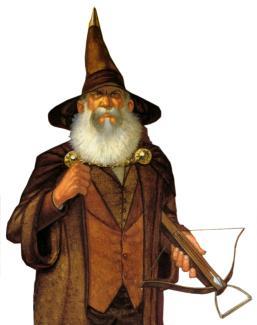 Arch-Chancellor of Unseen University, Ankh-Morpork's premiere Wizarding School. Combines traits of the traditional wizard with that of the stereotype of the gruff, outgoing huntin'-and-sportin' British gentleman. Far from stupid, but very stubborn and set in his ways. His mind has been likened to a steam engine: powerful, but slow to start and stop, and almost impossible to steer.

First seen in Moving Pictures- others filled the post before him.

He's a cross between Beleaguered Assistant and Hyper-Competent Sidekick to Ridcully. Although he complains about his job, he's happy enough with it to turn down Ridcully's offer of a real professorship and Brazeneck College's offer to make him Bursar. 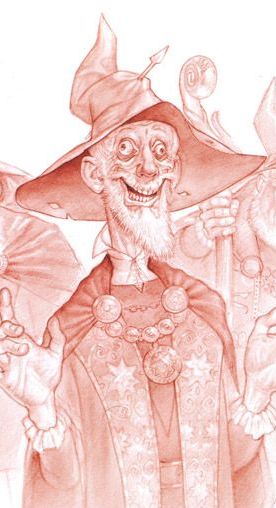 Dr. A.A. Dinwiddie ("that's Dinwiddie with an O") is usually referred to only by his title, primarily when Ridcully is shouting "BursAAAR!" to get his attention. He oscillates between a nervous wreck, manic, and schizophrenic, which the wizards attempt to manage by feeding him hallucinogenic pills made from toxic Klatchian jungle frogs, carefully designed to make him hallucinate that he is completely sane note A common hallucination, which is in fact shared by most people.. The dosage frequently needs adjusting. Regardless of whatever madness the wizards have cooked up lately, the Bursar is mentally several light-years away, and it's rare for him to come out with a comment that isn't a non-sequitur. 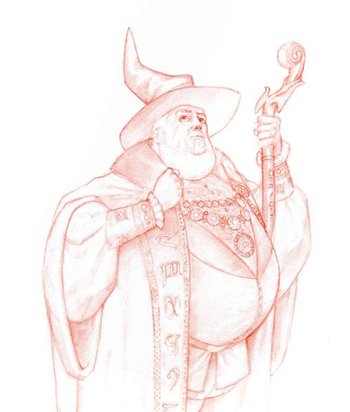 Another member of UU's senior faculty, the Dean (Henry, last name unknown) is seldom nice or kind. No one really knows what he does, besides attend public functions and eat big dinners. A wizard of the old school, the Dean is usually the first to launch fireballs in the face of danger, and prefers to go 'Hut-hut-hut' when trouble arises. He also may be more sensitive to occult changes in the world than other wizards, as during the 'Music With Rocks In' craze, he began to dress in leather and painted his room black while everyone else was only mildly rebelling. He may or may not be the one responsible for bringing our universe into existence, although it was completely unintentional on his part. By Unseen Academicals, he's become Archchancellor Henry of Brazeneck University.

The Lecturer in Recent Runes

Another member of UU's senior faculty. All we know of his real name is that it isn't "Arnold".

Another member of UU's senior faculty. Hogfather revealed that his first name is Horace.

The Chair of Indefinite Studies

Another member of UU's senior faculty.

Head of the Department of Necrom... er, Post-Mortem Communications, first introduced in Making Money. Professor Hix is required by university statute to be at least a little evil, within acceptable levels, which usually includes cheating at games, playing pranks, and making smart-alecky or tasteless remarks.