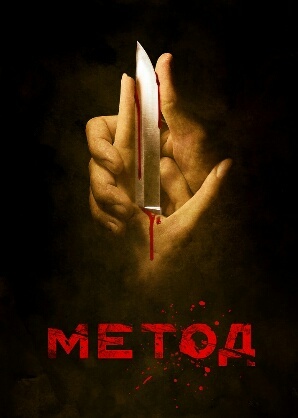 The Method (Russian: Метод) is a 2015 Russian Detective Drama directed by Yuri Bykov, produced by Konstantin Ernst and Alkesandr Tsekalo (who also appears in a bit part) and starring Konstantin Khabensky and Paulina Andreeva.

Rodion Meglin is an eccentric police investigator, renowned for three things: his hands-on, borderline brutal, approach to investigation, specialization in Serial Killer cases and solving the unsolvable. When he apprehends a killer of her fellow law school graduate, Yesenya Steklova decides that an internship with Meglin is her best bet to learning the skills she needs to solve the case of her mother's murder which she was a witness to a long time ago.

Surprising everyone, the Cowboy Cop agrees. They Fight Crime! as Meglin gradually turns the idealistic Yesenya into a copy of himself by dragging her along into brutal cases, up to and including using her as bait for the Villain of the Week.

The creators have waved off any allegations of ripping off Dexter, if anything, it's closer to MPD Psycho in tone and treatment of Gorn.

Having won several American awards as Best Foreign Criminal Drama, it, along with several other series from the same producers, may be coming

to Netflix in 2017, which was interesting considering that the Russian Duma was debating legislation in 2016 that threatened to make watching Netflix IN Russia impossible. However, as of October 2019, not only is Netflix still available in Russia but Netflix is targeting expansion in Russia.

A second season premiered on Russia's Channel One on November 8th, 2020.