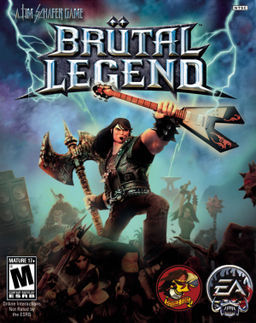 Close the city and tell the people that something's coming to call! Death and darkness are rushing forward to take a bite from the wall!
"Okay... You're sure you're ready for this? Because what I hold in my hand... is not just gonna blow your mind. It's going to blow your soul."
— Jack Black, Opening Cut Scene
Advertisement:

Brütal Legend is a heavy metal-themed Hack and Slash/Real-Time Strategy with light elements of driving and Rhythm Games, developed by Double Fine and published by Electronic Arts on Rocktober 16, 2009 for the PlayStation 3 and Xbox 360 consoles, Windows on February 2013, and Mac/Linux on May 2013.

The game is noteworthy in being inspired by, and providing a ludicrous number of Special Guests, Shout Outs, and references to just about everything metal. All the areas of the game are basically 1980s metal album covers, even. It provided yet another cult hit for Double Fine in their long history of cult hits, but received mixed reviews after its Development Hell ended. It has a very dedicated and vocal fanbase.

The story is pretty simple. Eddie Riggs, an average roadie for an average Second Wave of American Tween Melodic Rap Metalcore band is transported to the Land of Metal, where he must teach its people the ways of true metal to free them from enslavement by the demons of the Tainted Coil. For literally all intents and purposes, it's a story that is neoclassical metal wish fulfillment, backed up by one hell of a soundtrack that encompasses pretty much all forms of metal.

Compare Metalocalypse, another Affectionate Parody of all things METAL (and yeah, Dethklok is in the soundtrack of this one. They even had a short crossover).