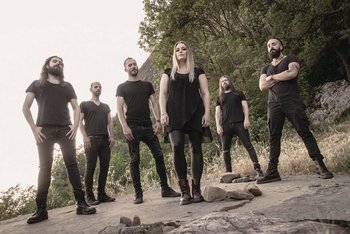 Founded in 2006, Ancient Bards is a Symphonic Power Metal band hailing from Emilia-Romagna. They are well-known for two things: their high-energy Epic Rocking and an all-original High Fantasy narrative their entire discography so far was founded upon. The band gained further recognition when vocalist Sara Squadrani collaborated with Dutch prog project Ayreon as the Girl in The Theory of Everything, released 2013.

The first three albums of the Black Crystal Sword mythos revolves around an alliance of the monarchs of Lastworld, together with their messenger, on a quest to return the eponymous weapon after it was stolen by the dark wizard Sendor. After a long hiatus the band came back together to continue the saga, kicking off the second part with Origine in 2019.