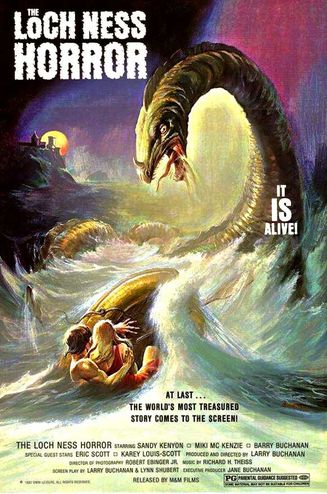 For once, not a case of Covers Always Lie; it may not look as impressive, but this does happen in the movie.
"Loch Ness. Deep. Dark. Cold. Frightening. Not to those living on its shores, but to those outsiders who threaten its world-famous secret, the Loch Ness Monster, this is a warning! There is something in these waters, and it is alive!"
— Needlessly Melodramatic Narrator
Advertisement:

The Loch Ness Horror is a 1981 horror film directed by Texan filmmaker Larry Buchanan (Attack of the The Eye Creatures).

Scottish scientist Professor George Sanderson obtains the help of American sonic expert Spencer Dean to hunt for the legendary Loch Ness Monster. Spencer ends up falling for Kathleen Stuart, the daughter of irritable local nobleman Jack Stuart, who claims to have taken the very first photo of Nessie and has it mounted on his wall. Meanwhile, rival scientist Professor Pratt and his men are also hunting for Nessie. They find a sunken World War II German bomber in the Loch before retrieving Nessie's egg. Although Nessie kills both of Pratt's assistants, he manages to abscond with the egg in his Volkswagen van.

Spencer and Sanderson's efforts to locate Nessie only yield the sunken plane, which causes a bit of a stiry, because it was supposed to have been shot down by a knighted M.P. back when he was a private During the War. He's concerned that the discovery of the intact bomber (which actually crashed due to engine failure) will ruin his political career, and so he sends Colonel Laughton of the British Army to institute a lockdown (Lochdown?) and destroy the evidence (i.e. the plane) via underwater demolition.

The film is infamous for its poor special effects, meandering story, awful use of California Doubling and the fact that, as with almost all of his films, Larry Buchanan uses members of his family both in front of the camera and behind it, whether they're suited to the task or not.