What Measure Is a Non-Cute? 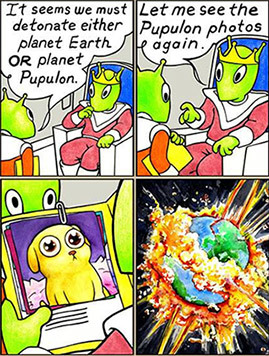 used with permission.
"A massively disproportionate amount of money goes towards saving the panda because it looks like a battered wife."
— Jimmy Carr, QI
Advertisement:

Humans, being as prejudiced as we are, tend to only like certain animals. Oh, how our dog smiles and plays! Oh, how our cat rolls on the rug asking for a tummy rub! Oh, how the hamster stuffs his chubby little cheeks! Oh, how pretty the Mute Swan is as he glides across the pond! Oh, how the Coelacanth... is a boring old fish.

You may have noticed that only cute, cuddly, and cool animals are good guys while unpopular or unattractive animals are brought in to be the Designated Villains. This usually plays into the "Carnivores are Mean" subtrope of Carnivore Confusion. Wolves were cast as baddies for centuries. Owls and hawks and corvids basically exist to drop down on our cuter protagonists from above. Wasps and termites are mini villains. Rats and Weasels are the go-to pocket-sized villains. Octopuses and squid are more or less discount Krakens. Friendly sharks pretty much exist only as a subversion. Don't even ask about snakes.

The heroes, on the other hand, will be cute or cool animals like doggies and kitties and bunnies and duckies and turtles and froggies and ladybugs and bees and ants and monkeys and friendly playful dolphins and Reticulated Chipmunks and you see where we're going with this right?

Wolves and Foxes, and Lions and other big cats can be heroes as well because their babies are cute and thus remind people of puppies and kittens, and the adults look badass. All butterflies are marked "Cute", even those you won't like to see in your garden. Spiders and bats are marked "Mean" even though they usually don't bother humans at all and even devour lots of annoying and dangerous insects. And if you'll encounter an Antlion in the role of horrible predator, its adult form is not likely to appear in next scenes (it looks like a cute, pretty dragonfly). For any animals not in this short list, it's usually divided into one of these.

Some fiction goes even further, casting only cute, cuddly, and cool animals — ugly and unpopular animals tend to be non anthropomorphic, villainous, or outright absent.

It should be noted that which animals get to be considered cute/cool or the opposite tends to vary by culture. For example, foxes are generally cute or roguish in America, mean in some parts of Europe and Magnificent Bastard types in others, magical tricksters in Japan, and Ax-Crazy evil in Korea. Cats are generally seen as bad and mean in the West, but in other parts of the world such as Japan and the Middle East, cats are generally playful and cute animals even if they are strays. Rats are portrayed as vermin in the western world, but are revered in India and are the first of twelve animals that represent the years on the Chinese Zodiac. Pigs are often outrightly dirty and greedy in western culture as well as in Middle East, but tend to get more consideration in China, where they are part of the aforementioned Zodiac as well. Dogs, while seen as cute, heroic and lovable in the West (certain breeds notwithstanding), are reviled in Middle East as evil scavengers.

Another factor may be the animal's size and/or place in human society. For example, both Mice and Rats can be cute, but they can get a bad rap because they're commonly household pests. Even then, the tiny Mice are likely to be portrayed more positively than the larger Rats. Consequently; if a cat is chasing a mouse, the cat is often portrayed as the villain, but a cat chasing a rat is usually the hero.

Whatever the case may be, if you happen to think any of the animals in the "Designated Villains" list are cute and/or cool, you are a weirdo in the eyes of the mainstream.

It is worth noting that there are some exceptions to this rule, because perceived slyness and/or cunning are often important determining factors along with cuteness. Rats and weasels, for example, are almost always portrayed as mean and/or evil, even though they are small and fuzzy. However, mice, who appear nice or mostly harmless quite a bit, are commonly thought to be unable to think their way out of a wet paper bag. For this reason, though cats are indisputably adorable, they are often seen as mean or a villain's pet in Western media.

This trope is pervasive enough that simply associating a human character with a certain animal or, in fantasy and science fiction, giving him the features of an animal can immediately peg them as good or bad. In extreme cases, this can start to look like the animal equivalent of Fantastic Racism.

This trope is Truth in Television and a major problem in wildlife preservation, with animals that appeal to humans termed charismatic megafauna, like the panda

for example. It doesn't matter if, like the aforementioned Coelacanth, you've survived damn near everything else the world can throw at you; if you aren't generally thought of as cute by most people, you're in serious trouble. Few people really care about ugly or unpopular animals, regardless of their ecological importance.

The Coelacanth example can also lead us towards the subtrope Prehistoric Monster, about the whole extinct animal ensemble, which often receives in media the same treatment as modern-day "non-cutes" or even worse.

The Uncanny Valley is somewhat related, as it was born from the scientific study of this trope. It is a supertrope of No Cartoon Fish. It often cross-pollinates with Beauty Equals Goodness, Animal Stereotypes, Carnivore Confusion, and What Measure Is a Non-Human?. See also Ugly Cute, Bat Out of Hell, Bug War, Ominous Owl, Reptiles Are Abhorrent, You Dirty Rat!, and Always Chaotic Evil. Contrast Dark Is Not Evil, Light Is Not Good, Tastes Like Diabetes, and Grotesque Cute. Also contrast Fluffy Tamer and Friend to Bugs for people with unconventional opinions on what animals qualify as cute or lovable. This trope also applies to humans and is often the deciding factor of who gets to be the Face of the Band. This trope is pervasive enough that the Killer Rabbit and some of the Bad Kitties exist to subvert it. Time period and location seem to affect public opinion of mustelids, as shown by the contrasting tropes Weasel Mascot and Wicked Weasel.

One way to subvert audience expectations with this trope is to turn the moralities of the characters on their head, but not the characteristics of the animals themselves. For example, use animals normally seen as unpopular (such as horseshoe crabs), and retain their "undesirable" qualities while showing that they're good at heart. Conversely, use popular animals (like dogs) to display pleasurable features, while hiding their malevolent nature.

Can overlap with Black Comedy Pet Death if "non-cutes" are killed for laughs.