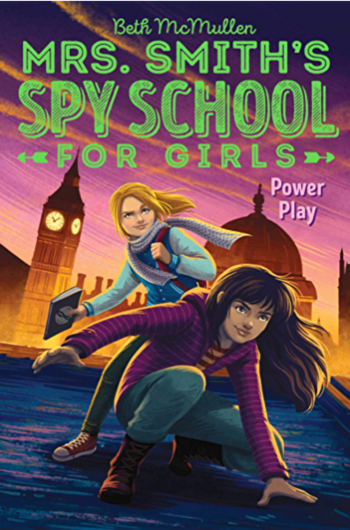 There's been some changes to Mrs. Smith's Boarding School since Abigail Hunter's enrollment and discovery of their secret spy program. Her mom is acting headmaster, and changes Abby doesn't like are being made (like getting rid of the macaroni and cheese from the school lunch menu), and also changes that she likes (like getting rid of the Angry Guard Dogs that used to prowl the grounds at night).

Of course, the biggest change is one that the headmistress had no control over, the release of "Monster Mayhem". A game about traveling to various places with the purpose of capturing monsters to level up. The game, made by Toby's dad, Drexel Caine, has taken the world by storm.

Anyway, after a strange explosion during a morning meeting, Abby finds that Toby has been sent a message to get five epic platinum-level monsters. What does he get in return? His dad's freedom. And he must keep it secret.

So naturally, he tells Abby.

Either way, soon, Abby and her friends are caught up in trying to help Toby catch all the monsters he can, while also dealing with the upcoming Fake Prom.

The book was published on July 3rd, 2018. The third book in the series, Mrs. Smith's Spy School For Girls: Double Cross was published in 2019.