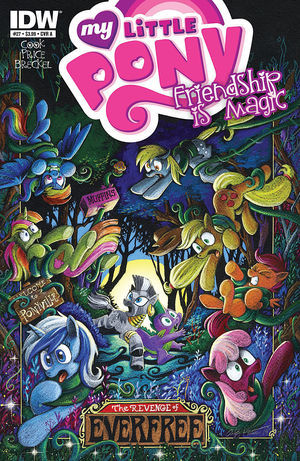 Root of the Problem

The Mane 6 and Spike are about to enjoy a quiet picnic when Zecora is chased out of the Everfree Forest, followed by vines and Timberwolves. The Mane 6 work to save the zebra, who thanks them for their help and explains she was chased out of the forest, and as they watch, vines and plants from the forest quickly encroach on Ponyville. Realizing time is short, the Mane 6 and Spike race into Everfree to try to find the heart of the forest. They come across a young deer, Bramble, who offers to take them there. When the ponies uproot a tree to cross a chasm, Bramble become enraged, and then shows that he, like other deer, carry a bit potion on them that helps to bring vines to life to help repair the damage. Apologizing for their mistake, the ponies are taken to the deer village of Thicket and meet King Aspen, the king of the deer. Aspen is not happy about seeing the ponies, but Twilight Sparkle is able to calm him down enough to learn why the deer are angry.

Aspen shows them the problem - just outside the Everfree is a large construction project run by the minotaur Well-To-Do to construct a new amusement park, aided by ponies and minotaurs alike. Aspen had tried to negotiate with the minotaur with no success, and in revenge, has caused the Everfree Forest to grow and take over the rest of Equestria. Twilight and the others go to Well-To-Do to try to stall the project, but the minotaur is insistent that progress must continue, and refuses to listen even to the Princess. Regrouping with King Aspen, the Mane 6 offer to do whatever they can to help the deer and the forest. Twilight becomes curious as to why Celestia has not done anything and has Spike fire off a letter, upon which we find both Celestia and Luna have become entangled in the Everfree vines, unable to do anything themselves.

The Mane 6 attempt peaceful means to deter Well-To-Do, but he refuses to give up, and King Aspen tells the ponies they should return to Ponyville to help evacuate there, allowing them to rest that night. During the night, Rainbow and Spike follow Bramble as the deer explores the construction site, noting that the strange smoothie mixes seem to have plant growing abilities. Bramble is suddenly captured by Well-to-do's mook, and Rainbow and Spike race back to warn the others. Just as King Aspen is about to attack the site, Well-to-do shows up, and forces Aspen to sign away the rights of the forest for return of Bramble, as well as to force Aspen to become a mascot of the park. With Aspen gone, Blackthorn, Aspen's second-in-command, takes charge and begins to plan a full out assault, enlisting Fluttershy to help convince the animals of Everfree to aid in battle.

Even when faced by the army of ponies, deer, and creatures, Well-To-Do refuses to budge, insisting he is doing everything lawfully and as a well-intentioned business minotaur. The army attacks, and Bramble sees a number of barrels of the organic smoothie mix nearby, directing everyone to knock them over. With copious volumes of liquid poured on the ground, the plants of Everfree are quickly regrown, and smash through the construction site, destroying it and freeing Aspen. Most of the other ponies and minotaurs working for Well-To-Do run off, but Well-To-Do insists that he still has rights to the land and will still build the theme park. Aspen agrees that he is unable to do anything in his power to stop Well-To-Do, but that same respect doesn't extend to the creatures of Everfree, and the hydra quickly devours him.Note but only to the point Well-To-Do ends up stuck in the hydra's stomach as revealed by the 2-page short.

The deer quickly work to recall all the vines that they had sent out across Equestria and promise to help fix any damage. Princess Celestia arrives and she and King Aspen agree to keep Everfree for the deer and the creatures, and thanks the Mane 6 for their help. Before Celestia departs, Pinkie Pie gives her a new drawing for one of Canterlot's stained glass windows depicting the event, which Celestia quickly regrets when she finally sees it after it is made.

STAB HIM WITH YOUR ANTLERS!

King Aspen learns that his son was taken from him by Well-To-Do, and is now inside of Thicket demanding for King Aspen to surrender. Linkara lists all the sane reasons to have King Aspen kill Well-To-Do.

STAB HIM WITH YOUR ANTLERS!

King Aspen learns that his son was taken from him by Well-To-Do, and is now inside of Thicket demanding for King Aspen to surrender. Linkara lists all the sane reasons to have King Aspen kill Well-To-Do.