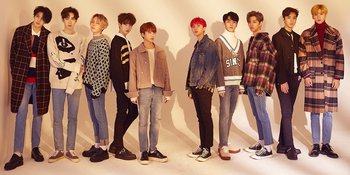 Pentagon is a South Korean boy band consisting of nine (formerly ten) members. They debuted on October 10, 2016 under CUBE Entertainment with the song 'Gorilla'.

The original group of ten members was formed on the Mnet survival show Pentagon Maker. It involved each member undertaking various tasks and performances for points, which would then contribute to their 'pentagram', a diagram showcasing their scores in five different categories- vocal/rap, dance, talent, teamwork, and attitude (referred to as 'mind'). Each category represented an attribute thought to be important for an idol to have.

On completion of their pentagram, each member would become part of Pentagon and thus be allowed to debut. By the end of the show, seven members had been confirmed as official members of the group, while three members- E'Dawn, Yan An and Shinwon- had been eliminated. Despite the elimination process, all ten debuted together.

Along with several concerts, fan meetings and showcases, the band have had a world tour named PRISM which ran from April 27, 2019 to December 21, 2019. They have also had a short tour in Japan named Dear Cosmo.