Useful Notes / The House of Windsor 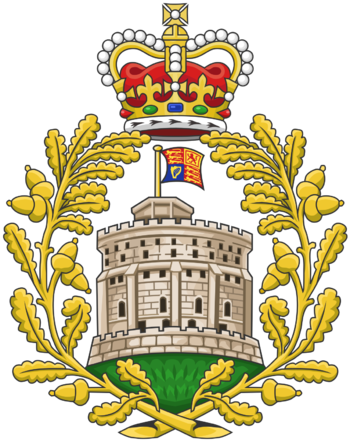 Thy choicest gifts in store
On her be pleased to pour,
Long may she reign!
May she defend our laws,
And never give us pause
To sing with heart and voice:
"God save the Queen!"
— "God Save the Queen", third verse

On 8 February 1960, the Queen confirmed that she and her children would continue to be known as the House and Family of Windsor. Though the Royal House is named Windsor, it was decreed, via a 1960 Order-in-Council, that those male-line descendants of Queen Elizabeth II and Prince Philip who were not Princes or Princesses of the United Kingdom should have the personal surname Mountbatten-Windsor. In practice all of their children, in honour of their father, have used Mountbatten-Windsor as their surname (although Princes William and Harry have "Wales" on their military uniforms, reflecting the long-standing tradition that when a surname is required, as for military service, a royal will use his most prestigious title as if it were a surname). Since becoming Queen, she is Elizabeth II, all other names are not used officially. There was a minor flap about her being the first Elizabeth to rule over Scotland (thus making her Elizabeth I there, if that rule were to be believed), but the Royal Family decided that when Scotland and England had different numbers of rulers of the same name, they would follow the higher one whether it was Scottish or English. As it happens, that is the rule that had (accidentally) been followed since the Act of Union 1707.note Of the eleven monarchs since the Union, seven (Victoria and all six Georges) had names never used before the Union, one (Anne) had an equal number of uses before the Union (namely, herself, since she was the monarch in 1707, and was the first Queen Anne in both kingdoms), and three (Edwards VII and VIII, William IV, and Elizabeth II) had previously-used names. In each case, the English number has been higher; Scotland never had an Edward or Elizabeth before the Union, and had only two Williams (the thirteenth-century William the Lion, and then William III of England, who was independently William II of Scots). A consequence of this is that if there were to be another King James, he would be James VIII (since James II of England was James VII of Scotland).

The Windsors were also monarchs of Ireland (until 1949 or 1937, depending on how one interprets the Irish constitution), India (until 1950), and Pakistan (until 1956). As noted below, the family was originally known as the House of Saxe-Coburg and Gotha (Sachsen-Coburg und Gotha), the name of the ducal house to which Prince Albert, Queen Victoria's husband, belonged; this family also holds the monarchy of Belgium and is descended from the late medieval Wettin Dukes of Saxony (the ones who, most famously, protected Martin Luther during the Reformation).note  The House of Wettin is split into two main branches ever since Ernest, Elector of Saxony, Landgrave of Thuringia and Margrave of Meissen, divided up the Wettin territories between himself and his younger brother Albrecht (Albert III) in 1485. Paradoxically, Queen Victoria's consort Prince Albert comes from the Ernestine (ducal), not the Albertine (royal) branch. The Ernestine Wettins continued to divide the lands of a ruler amongst his sons longer than most other ruling houses, which meant that Ernestine territory became fragmented into different lines; when a line died out its territory was inherited by or divided up between Ernestine relatives. This is why the name Saxe-Coburg and Gotha only started with Albert's father Ernest (Ernst). His line had previously been known as Saxe-Coburg-Saalfeld, but in 1825 the Saxe-Gotha-Altenburg line died out; in the subsequent re-partitioning Ernest inherited Saxe-Gotha through his consort Louise, but he had to give up Saalfeld to the Duke of Saxe-Meiningen. Consequently Prince Albert and King Leopold I (Ernest's younger brother) are called Saxe-Coburg and Gotha, while Ernest's sister Victoire (Queen Victoria's mother), who married the Duke of Kent in 1818, years before the re-partitioning, is called Victoria, Princess of Saxe-Coburg-Saalfeld. George V later changed the name during World War One to appease anti-German sentiment (his Belgian cousins did the same).

The House of Windsor, from the current sovereign to historic members

Elizabeth II of the United Kingdom 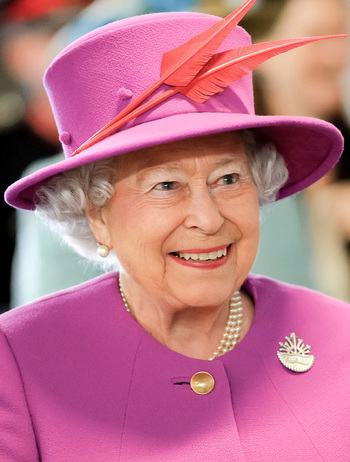 Born: 21 April 1926 note Her 'Official Birthday' is in June in the UK, May in Canada
Reign: Since 6 February 1952 —
Full Name: Elizabeth Alexandra Mary
Parents: King George VI and Lady Elizabeth Bowes-Lyon
Consort: Prince Philip of Greece and Denmark
Title: Her Majesty Queen Elizabeth II
Nicknames: Lilibet note to her family; Cabbage note to Prince Philip; Shirley Temple note to her uncle the Duke of Windsor & Wallis Simpson, disparagingly, and on account of her curls and destiny for stardom

The current monarch, and her family. Elizabeth is very popular, to the point that some of the nations of the commonwealth have actually rejected movements towards republicanism, preferring to retain her as their Head of State (even if only a ceremonial one). She is the longest-living British monarch in history, and as of September 9, 2015 the longest-reigning British monarch, beating the record formerly held by Queen Victoria. She is also the longest-reigning and longest-lived female head of state in world history, and second only to the Sun King in length of reign for the monarch of a European Great Power

As the most famous monarch in the world, she has her own page — HM The Queen — containing much more information. 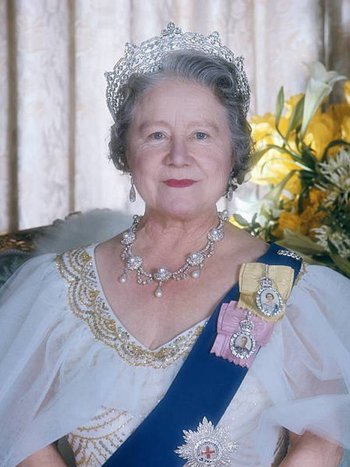 Pre-marital name Lady Elizabeth Bowes-Lyon, having been born the daughter of the Earl of Strathmore and Kinghorne.note A title in the Peerage of Scotland, created in 1606 for her ancestor the Lord of Glamis; before that, her ancestors had been Lords and still before that Thanes of Glamis since 1372. Better known as "The Queen Mum", she lived for over 100 years

The Princess Margaret, Countess of Snowdon 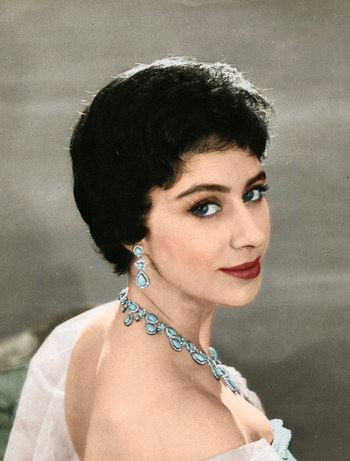 The Queen's little sister and in many ways her complete opposite. Known for her beauty and hauteur in equal measure, she epitomises The Beautiful Elite and was THE original Rebellious Princess. 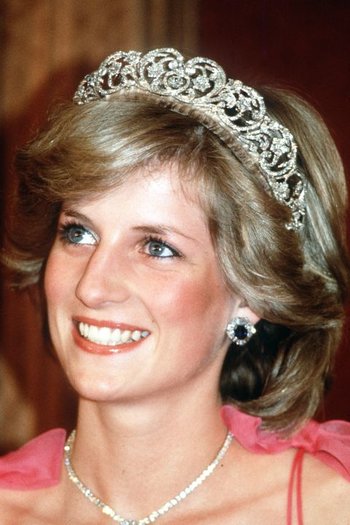 Pre-marital name Lady Diana Spencer. Often dubbed “the most famous woman in the world”, you’ve almost certainly heard of her, often as the technically incorrect 'Princess Diana'.note inspiring numerous cartoons in which she and Wonder Woman received each other's outfits back from the cleaners, &c.

George VI of the United Kingdom 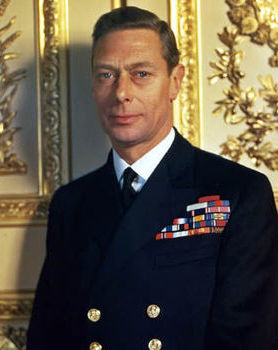 Father of the current queen, husband of the late Queen Mum. Last King of Ireland and last Emperor of India.

Edward VIII of the United Kingdom 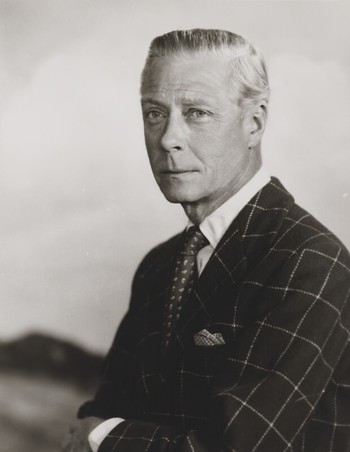 Elder brother of George VI and uncle of Elizabeth II. Known as "David" among his immediate family until his accession. 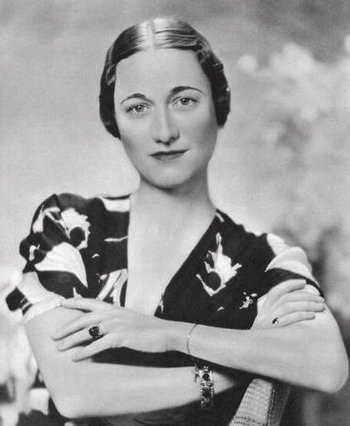 One of the most scandalous women in British history, Mrs Simpson hit the headlines in the The '30s when it became public knowledge that she was King Edward VIII’s mistress – and that he intended to marry her. Simpson will forever be known as the woman who rocked the Royals and plunged the monarchy into crisis.

George V of the United Kingdom 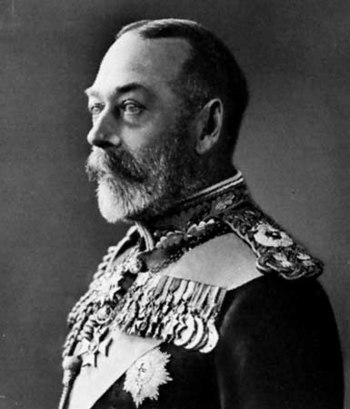 Father of Edward and George, grandfather of Elizabeth II. Solid, reliable, conservative monarch, by no means intellectually brilliant but a steady capable hand (rather like Elizabeth II in fact). Also a keen philatelist. 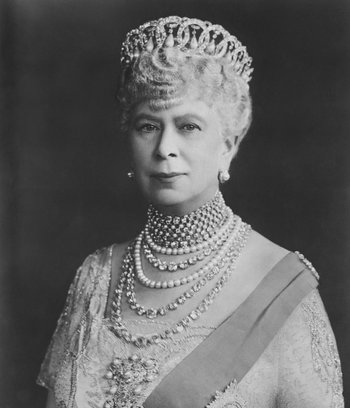 Her full name being hugely bulky even by royal standards — Victoria Mary Augusta Louise Olga Pauline Claudine Agnes — she was informally called May, after her birth month.

Edward VII of the United Kingdom 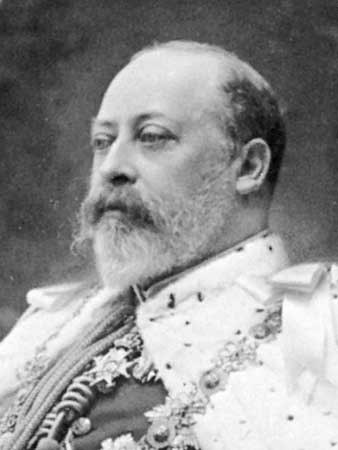 Great grandfather of Elizabeth II. Lent his name to The Edwardian Era. Prior to his coronation, known as Albert Edward, and called "Bertie" by the family even after he became King. 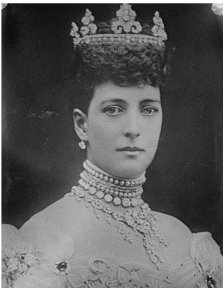 Wife of Edward VII, she was a Danish princess before she married into the British royal family.

We go back any further, we're into the Hanover dynasty.