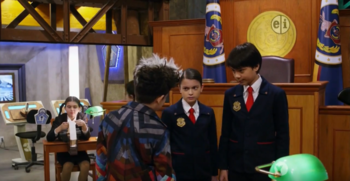 "Both parties have agreed to drop their claims, and have their cases settled here, in our forum, The Odd Squad Court."
Disorder in the Court

When Olive is accused of causing oddness by Odd Todd, she must go on trial and prove her innocence or get kicked off the Squad forever.