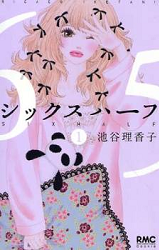 Six Half is a manga created by Iketani Rikako and it ran from 2009 to 2015 serialized by Cookie.

Kikukawa Shiori wakes up and finds herself in an unfamiliar hospital. Surrounded by people she cannot recognize. She had a motorcycle accident and is now suffering from amnesia. A Yankee-looking boy that claims to be her boyfriend, a kindhearted older brother and an introverted sister, with all of them being strangers to her.

Now living in a house that she feels lost in, Shiori tries to work things out about her previous self and maybe jog her memories. Though what she overhears from schoolmates makes it appear like she was a terrible person. Concerned about those rumors and her own lack of identity, Shiori goes to work on herself. And maybe find 'herself' again.

Six Half contains the following Tropes