Literature / March of the Robots 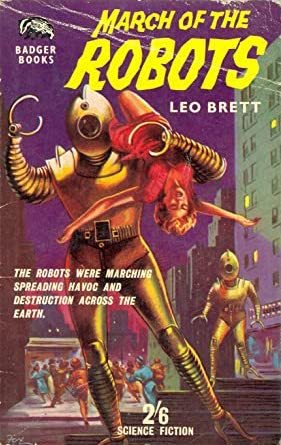 "All your babes are belong to us!"
Advertisement:

March of the Robots is a Science Fiction novel written by Lionel Fanthorpe. It was written in 1961 and published by Badger Books under one of his many pseudonyms, Leo Brett.

Terence "Terry" Kildaire works as chief of control at the Research Establishment, an atomic research facility nebulously connected in some way to the Home Office, and he's in big trouble. He's on trial for double homicide. Evidently, he murdered his assistant controller Rawlinson and a departmental chief named Royston. It takes the jury just ten minutes to convict him. But due to the lack of a clear motive, Kildaire is remanded to the custody of Long Meadow, an asylum for the criminally insane. There, Dr. Len Williamson and his colleague Dr. Bill Coe discover a scar on Kildaire's head, despite there being no record him having had surgery.

Meanwhile, in a small town near the Research Establishment, "Ticky" George wanders into the Blue Dragon for his usual several glasses of shandy and armed with a weird story about something he witnessed in the woods that night. He claims he witnessed a big silver ship come down in the woods the other night and disgorge a bunch of "tin men." Something about his story rings true for the landlord, who presses George for more. In-between sips of shandy, George can only report that the metal men wandered around a bit, then got back in their ship and left.

Back at Long Meadow, Kildaire is lucid enough to explain he doesn't remember committing the murders, and in fact remembers nothing after witnessing a spaceship land in the woods one night. An examination of the scar on Kildaire's reveals the presence of some kind of implant in his head. A quick call to MI5 brings Colonel Henry Rothman running. Rothman, along with his aide Major Richard Bruce, decide to go visit the Establishment. They're particularly interested in the woods around the area where Kildaire claims he saw the ship land.

A Geiger counter wielded by Bruce confirms the earth to be mildly radioactive. Now they definitely know something is up. It is Colonel Rothman's theory that whoever or whatever landed in the forest that night put the weird device into Terry Kildaire's head and made him kill Rawlinson and Royston, most likely to disrupt Britain's atomic research.

Later that night, the ship returns. Town drunk Freddy O'Flannagan is on another bender. Caught wandering the streets late at night by his lonesome, he is doing his very best to convince Constable Dalrow that he is sober and failing when the two hear the approach of loud, clanking metal footsteps, as an army of silver robots appears through the fog with the conquest of Earth very much on their minds.