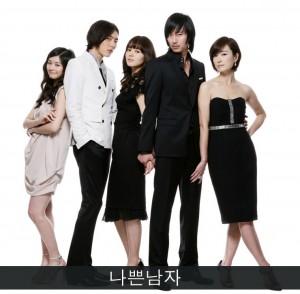 South Korean Drama first broadcast in May 2010, consisting of 17 75-minute episodes. Also called "Bad Guy" in some venues. Have a lot of resemblance with 2002 Fuji TV drama Sora Kara Furu Ichioku no Hoshi (空から降る一億の星; lit. One Million Stars Falling from the Sky.)

The plot is a typical twisted Soap Opera, where a forgotten family member plots the downfall of a rich but corrupt family living in Seoul.

Shim Gun Wook was first adopted then abandoned by the powerful Hong family, who own the Hae Shin Corporation, a development and construction company. Twenty years after he was left at an orphanage, he is now a cunning Chessmaster and plans to destroy both the company and the family.

Moon Jae In is a young independent art consultant working with the matriarch of the family to open a new art gallery, who is also raising her sister. She becomes an unwitting pawn in Gun Wook's schemes.

Hong Tae Ra was born as the first daughter in the chaebol family. She has never said no to her parents and went through an arranged marriage, living her life like the typical upperclass housewife.

Hong Mo Ne is the youngest Hong daughter, who missed being pushed into an arranged marriage when it's discovered her fiance is having an affair with an actress.

Hong Tae Sung is the son adopted after Gun Wook was abandoned. He is the younger son, rebellious and angsty.

Hong Tae Gyun is the older brother, who is secretly involved in stock manipulation.

The Death by Origin Story begins when Chae Sun Young falls from a high-rise building to her death in the first minutes of the first episode. It turns out she is Gun Wook's Childhood Friends from the orphanage, and Tae Sung's girlfriend.