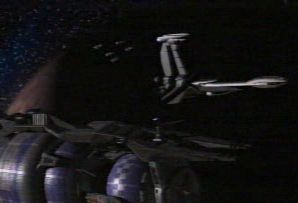 "The Rules of the Game" is something almost every Spin-Off has: the big crossover episode with the parent show. Gideon travels to Babylon 5 to get Captain Elizabeth Lochley's help talking the Lorkans into letting him investigate Lorka VII, formerly inhabited by an extinct Precursor race, for the cure to the Drakh plague. Unfortunately the Holier Than Thou Lorkans aren't thrilled with the idea and reject it. Gideon isn't inclined to take "no" for an answer and stays on-station hoping to talk them around, but in the meantime he asks Lochley out to dinner.

Meanwhile in the B-plot, Eilerson runs into his ex-wife Cynthia, who owes a hundred grand to some local mobsters. Eilerson tells her he'll pay them the principal, 50,000 credits, but not the vig. Cynthia isn't happy; neither is Broth Meuller, her Loan Shark.

The next morning Gideon and Lochley meet with the Lorkans again, who stonewall them again, claiming that to allow offworlders onto Lorka VII would expose the citizenry to corrupting influences. After they leave, the Lorkan ambassador and his aide worry that Gideon might travel to their world even without getting permission, and decide to kill Lochley and Gideon just to be safe.

Mueller takes Cynthia's cat hostage in retaliation for Eilerson's interference, which pisses off Eilerson because it was his cat before the divorce. He storms out and calls the ship to have Dr. Chambers sit in with Cynthia while he settles matters.

Gideon decides to spend more of his off-duty time with Lochley and bets her that if she were to go out and wander the station out of uniform nobody would recognize her. Heading into Downbelow, she arrows to a Drazi food vendor, who promptly gives her "the usual, and nice to see you, Captain Lochley". Their date is then rudely interrupted by the Lorkans, but the two seasoned Earthforce officers quickly turn the tables and overpower them.

Eilerson cold-cocks Mueller and uses a piece of Imported Alien Phlebotinum he found on one of his expeditions to threaten Mueller into staying away from him and Cynthia. Oh, and he wants the cat back, too, with a bath.

Still hopped-up on adrenaline from the murder attempt, Gideon and Lochley head back to her quarters to change out of their soiled clothes and end up in the shower together. The next morning they agree that given their situation a conventional relationship is going to be basically impossible but there's no harm in seeing each other when they can. Meanwhile the Lorkans reveal that their ambassador had been illegally selling artifacts from Lorka VII on the side and the assassination attempt was an attempted cover-up. They agree to allow Gideon to visit their world... as an example to the citizenry of how unholy offworlders are.

Like most of Crusade, "The Rules of the Game" was aired Out of Order. Various revised episode lists

place it as being meant to be either the eleventh or thirteenth of the completed episodes. Given its location in the Gideon/Lochley Romance Arc it logically takes place after "Ruling from the Tomb" (aired as episode 6) and "Each Night I Dream of Home" (aired as episode 13).