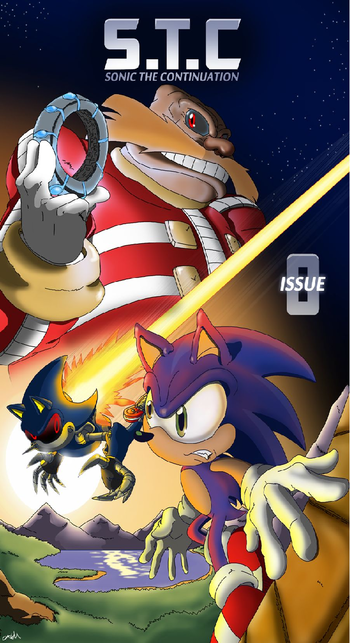 Sonic the Continuation is another Fan Sequel webcomic to Sonic the Comic. It is written by DeviantArt artist Tom Campbell, better known as Okida

and the co-writer of Ghosts of the Future, and drawn by him, Dreamcastzx1, and ProfessorZolo (Keep in mind the latter two's art are often NSFW), which can viewed on his DeviantArt page starting with Issue 0

Sonic the Continuation is a separate continuation project from the more well-known Sonic the Comic – Online!. Though it shares a few similarities, it goes in its own direction, and is noted to have a far more serialized, overarching plotline than the other versions. It picks up from the final official arc "Point of No Return" in a completely different direction than Sonic the Comic Online.

It has a crossover with notable Sonic fancomic Okida is also known for, Ghosts of the Future, which takes place in an Alternate Universe of the Sonic game universe. Additionally, it also has a crossover with Okida’s interpretation of Teenage Mutant Ninja Turtles known as Turtle Power.

Sonic the Continuation provides examples of: