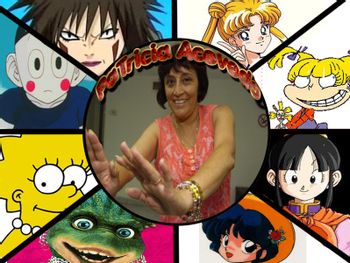 Patricia with some of her characters. Montage by Deckush

María del Socorro Patricia Acevedo Limón (born April 29, 1959), better known as Patricia Acevedo, is a Mexican voice actress and director born in Mexico City. One of the most popular female LA-VA's, Acevedo made her voice-acting debut in 1979 while her father Josafat was working as a chef for the now-defunct studio SISSA-Oruga. Her popularity exploded when she was cast as Usagi/Serena Tsukino in Sailor Moon, which first aired in Latin America in 1995.

She's not easy to typecast, as despite how her voice is among the most recognizable in LA-dubbing, she plays several character types in themselves.

She has quite the acting relationship with characters voiced by either Mónica Manjarrez, Rossy Aguirre or Mario Castañeda.

Her respective niece and son, Casandra and Rodrigo Acevedo, are voice actors in their own right (Casandra even voiced Jun-Jun from Sailor Moon Eternal).

¡Soy una Sailor Scout que lucha por el amor y la justicia, soy Sailor Moon! ¡Y te castigaré en el nombre de la Luna!! Explanation  I am a Sailor Scout who fights for love and justice, I am Sailor Moon! And I will punish you In the Name of the Moon!

Si alguien me busca, estoy en mi alcoba. Explanation If anyone needs me, I'll be in my room.