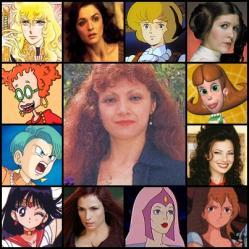 Mónica Manjarrez (in the middle) and some of her roles.
"¡Por el Poder de Marte, Transformación!" Explanation "By the Power of Mars, Transformation!", Rei Hino/Sailor Mars' transformation call in the Latin American Spanish dub of Sailor Moon.
Advertisement:

Mónica Elizabeth Gómez Dosamantes (born December 31, 1967), better known as Mónica Manjarrez, is a Mexican voice actress who's been active since The '80s and became famous in the mid-1990s. She's best known for voicing Rei Hino/Sailor Mars in Sailor Moon and Princess Leia Organa in the second Latin American dub of the Star Wars original trilogy. Her best roles are the Tsunderes, Cool Big Sisters and Action Girls.

She and Gerardo Reyero have often voiced official couples, whereas she and Patricia Acevedo have often played friends.

After being inactive from 2012 to 2015 due to family reasons, Manjarrez resumed her dubbing career in 2016.