Western Animation / Why, Charlie Brown, Why? 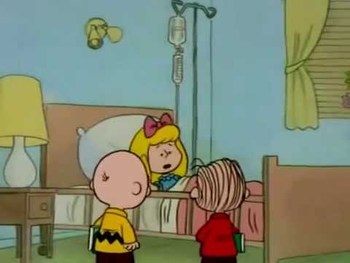 First aired on CBS in 1990, this Peanuts special (the 33rd overall) is notable as the first animated cartoon to tackle the subject of cancer. Sadly, Peanuts creator Charles Schulz would lose his own battle with the disease a decade later, but his approach to the topic was a brave move and has been celebrated and replayed for decades (although finding it on video was trickier, as the Trivia page will tell you).

On an autumn day, Linus notices his classmate Janice is getting a lot of bruises and feeling tired, so he convinces her to see the nurse. When he learns about Janice and her cancer diagnosis, Linus starts to go through a change. As Janice's treatment for cancer progresses, the seasons changes to symbolize this, and Linus becomes stronger for being emotionally affected by the issues, even going as far as to chew out Lucy and a schoolyard bully for their picking on Janice.

Linus verbally destroys a bully who removed Janice's hat and laughed at her baldness caused by her leukemia.

Linus verbally destroys a bully who removed Janice's hat and laughed at her baldness caused by her leukemia.