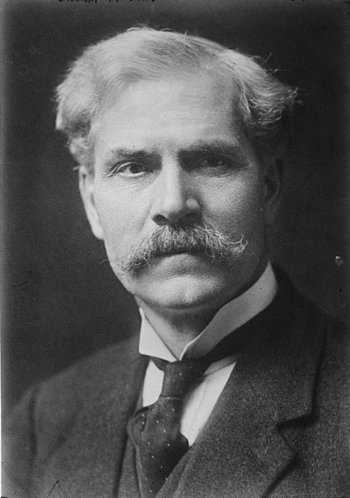 A fine moustache.
"He wishes to do the right thing...Today 23 years ago dear Grandmama died. I wonder what she would have thought of a Labour Government!"
—King George V

James Ramsay MacDonald (12 October 1866 – 9 November 1937) was a British politician and twice Prime Minister of the United Kingdom and the first Labour Prime Minister in 1924.

His first government was a minority government that lasted about 9 months. MacDonald took the post of Foreign Secretary as well as Prime Minister and made it clear that his main priority was to undo the damage which he believed had been caused by the 1919 Treaty of Versailles. In order to try and get an overall majority he called an election, and then one of the biggest scandals of the age hit: the Zinoviev letter. This falsified document apparently showed the leader of the Communist International in the USSR instructing British Communists to prepare for revolution, causing a backlash against the whole left and a belief that only the Conservatives could stand against Communism. Labour actually gained votes in the election, but many Liberal supporters switched to supporting the Conservatives, handing the latter victory.

Labour came back to power in 1929 but then got swept away by The Great Depression and MacDonald's insistence that the government did not use deficit spending to stimulate the economy. In 1931 he formed a "National Government" with the Conservatives, but only a handful of Labour politicians followed him; the Labour Party kicked him out and labelled him a traitor. In the 1931 election, the National Government won the biggest landslide in British history and MacDonald was left in the peculiar situation of being a socialist politician steering a Conservative-dominated government.

His health deteriorated during the rest of his premiership and most of the actual power got handed to Stanley Baldwin, handing the Premiership over in 1935. MacDonald stayed in government until 1937 and died later that year.