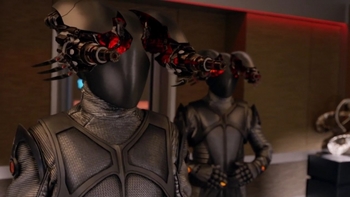 The one where we meet the Kaylon, and everything goes to hell.

When a mysterious force shuts down Isaac, the Orville must head to his far away and reclusive home planet to fix him. But getting there is just the start of troubling events for the Orville and the galaxy at large.

The Kaylon fleet heads for Earth with the Orville at the head. And the crew has to try everything to warn Earth of the danger. Including reaching out to their other enemies.
Part 2 Tropes