What Could Have Been / Age of Empires III 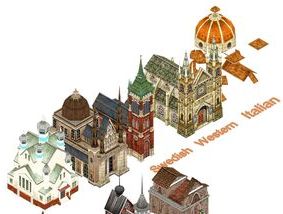 The cathedral-like beta churches of the Russians, Spanish, Swedish, British/French, and Italians, still buried in the game's code.

After Age of Mythology, Ensemble Studios wanted to take the Age of Empires series into unexplored territory... and Word of God says they got a little lost along the way.