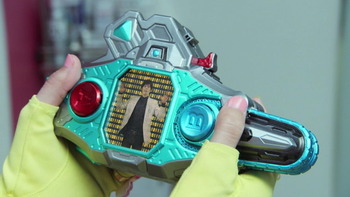 "God" suddenly became a lot less intimidating. Also… Now you can get your own!

Being one of the darkest Kamen Rider series doesn't mean the goofy aspects of them are ignored. Those goofy visual style and designs are here to aid you in this Crapsaccharine Medical Drama.

Episode 1: I'm a Kamen Rider!
Episode 2: Two Geniuses? No Thank You
Episode 3: That Guy Appears With a Bang!

Episode 4: An Operation Called "Dash"!
Episode 5: Everyone Gathers, a Clashing Crash!
Episode 6: A Hollow Beating In The Heart
Episode 7: The Essence to Some lie
Episode 8: Men, Fly High!