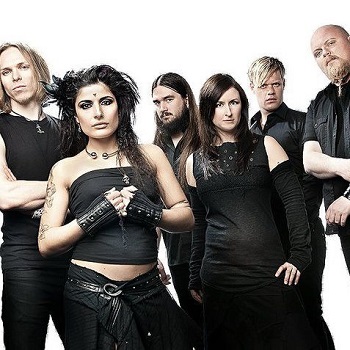 Tristania was a Gothic Metal band from Norway that was active from 1995-2022, and often considered one of the pioneers of the genre. The band was formed in 1995 by Morten Veland, Einar Moen and Kenneth Ølsson, with Anders Høyvik Hidle and Rune Østerhus joining shortly afterwards. Vibeke Stene was initially recruited as a guest singer for the demo recording, but she later joined as a regular member. During the summer of 1997 different labels showed interest in the demo. Tristania signed with Napalm Records and released their first EP, Tristania.

Tristania's first full length album: Widow's Weeds, was recorded at the end of 1997 and released early 1998. The album is Gothic Metal with elements from a large variety of genres including Symphonic Metal, Death Metal, Classical Music, and Black Metal.

The band's second full length album: Beyond the Veil, was released in 1999. In December 2000 Veland and the rest of the band agreed on going separate ways, due to musical and personal differences. World of Glass was released in September 2001, with guest contributions from Ronny Thorsen, Pete Johansen, and Jan Kenneth Barkved. Østen Bergøy, who did guest vocals on the previous albums, became a full time member at this point. The album added Classical and Industrial Metal elements to Tristania's sound, and included the band's only cover version: "The Modern End," originally by Seigmen. "Ashes" was released on SPV / Steamhammer Records in February 2005 and featured a stripped down sound that de-emphasized the classical and operatic elements of the previous albums.

Tristania's fifth album: Illumination, was released in January 2007, with touring guitarist Svein Terje Solvang added as an official member. Vorph of Samael appeared as a guest singer and a string quartet appeared on several songs. Shortly after the release of the album, Vibeke Stene suddenly decided to quit her musical career in order to focus on family and her work as a teacher. After holding auditions for a singer with a voice different than Stene's, Tristania recruited singer Mariangela Demurtas from Sardinia, Italy, who officially joined the band in October 2007.

Østerhus and Solvang both quit the band in 2008. Ole Vistnes joined as the new bassist and Gyri Losnegaard later joined as second guitarist. The new line-up featuring Demurtas on vocals debuted on 29 February 2008 at a festival appearance in Kiev, Ukraine. The next member to depart was drummer Kenneth Ølsson, who was replaced by Tarald Lie; while singer Østen Bergøy scaled back to part time status with the band due to family commitments. Kjetil Nordhus was added to the lineup on clean vocals. The band's sixth album: Rubicon, was released on 25 August 2010.

The demo for the seventh album that gave birth to the final version of the songs in Darkest White were produced between June and September 2012. Soon after, the band re-adjusted the songs by themselves, in an improvised studio at Ole Vistnes' apartment, between September and December 2012. On January 2013, the band entered the studio to make the definitive recordings of the album, finishing in less than a month, the band's shortest recording period so far, and released the album in May 2013. The album was critically well received, and often considered the "real comeback" for the band after Vibeke Stene's departure.

On September 17, 2022 the band announced via social media that they would be disbanding due to "a serious medical situation in near family within the band, which will make it impossible to pursue both short and long-term plans with the band"

. Mariangela shared the post via her social media as well, writing "I am not coming with good news today unfortunately… I will spend some more words on this matter later.. excuse me for now, but this is not an easy post to make".

This band displays the examples of these tropes: