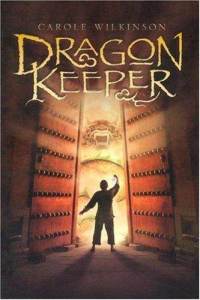 Dragonkeeper is a series of historical fantasy children's novels, written by Australian author Carole Wilkinson and set in Ancient China. The series consists of seven books, including two trilogies that tell complete stories and a prequel.
Advertisement:

The first trilogy is set in China's Han Dynasty and revolves around a young slave girl named Ping who discovers she is a Dragonkeeper and must protect Long Danzi, one of the last living dragons, and later his son Kai too. The second trilogy, set over four centuries later, revolves around Kai searching for a new Dragonkeeper and meeting a young novice monk named Tao who may fit the bill.

The books (in order of publication):

Not to be confused with the Dragon Keeper Chronicles or the first book in Robin Hobb's The Rain Wild Chronicles.