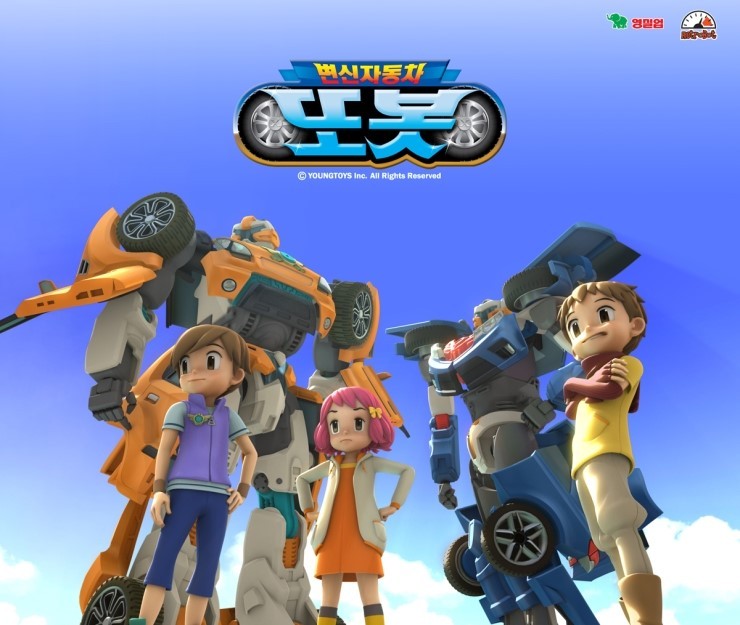 Tobot, known in Korea as Byunshin Jadongcha Tobotnote Transforming Cars Tobot, is an animated series produced in South Korea by toymaking company Young Toys and animating studio Retrobot. The first merchandise was released in 2009, and the animated series spanned 19 "seasons" from 2010 to 2015, featuring transforming robots and their "pilots".

Many years ago, Dr. Franklin Char and Limo, a pair of scientists work to combine their ideas in an effort to create a robot to help the world. However, their lab catches on fire and the two are separated, Franklin is injured, both of their wives are killed and their new robot fails to save them. Five years later, a group of mysterious men capture Franklin to the surprise of his twin sons, Ryan and Kory, who find that their father's car is actually a transforming robot.

The series has two English dubs: a Southeast Asian dub that stopped at season 13, and a North American dub by Ocean Productions that has finished dubbing the entire series (although it isn't readily available).

Note: as of April 2017, the videos are not available for viewing in the US, apparently. A similar trend has been noticed by one troper among various other foreign, especially Korean, animations with English dubs.

For reference, here's how the episodes of the English Dub are broken down: each of the Korean episodes are only approximately 4 minutes long. Each Korean Season (which is generally what is being referred to when "Season" is used on this page) is made up of about 16 (later 28, then 30) of these episodes that comprise 1 Story Arc.note The exception being Season 19, which spanned only 14 episodes but had episodes about 10 minutes long. The 28 episodes of what is listed as "Season 1" here

is comprised of the first 7 Korean Seasons broken up neatly into seven 4-episode Story Arcs, with each episode having four of the 4-minute Korean episodes spliced together with Eye Catches that, together with the Intro, Outro, and "last time/next time on" segments, make a more typical 21~ minute episode. "Season 2

" uses a similar structure. The English episodes are seamless enough that you wouldn't know they were originally 4 minutes long unless you stumbled upon it or were told.

Has a sister series called Biklonz, as well as a spin-off, Tobot Athlon. A new series, Tobot V, is currently in production, albeit with Studio Button at the helm instead of Retrobot.